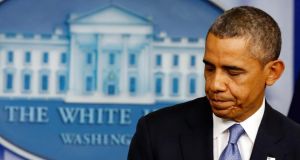 US President Barack Obama finishes a statement to the media about the government shutdown in the briefing room of the White House in Washington last night. Obama said the government shutdown was entirely preventable and accused Republicans in the House of Representatives of manufacturing a crisis that would hurt the economy and citizens across the country. Photograph: Larry Downing/Reuters

Torn apart by political wrangling between Democrats and far-right Republicans, Congress was unable to agree a short-term budget to keep the US government funded beyond the fiscal year-end at midnight last night. This led to the first government shutdown in 17 years at 12.01am (5.01am Irish time).

Republicans in the lower chamber of Congress, the House of Representatives, intent on unwinding President Obama’s Affordable Care Act, the healthcare law known as Obamacare, sought to derail the law for a period of a year by making this a condition of a temporary budget to fund the government.

Obama has refused to allow House Republicans unwind the single biggest legislative achievement of his presidency. The Democrat-led Senate has also refused to unwind a law passed in 2010, leading to stalemate on Capitol Hill, a deadlock reflecting the current dysfunctional nature of American politics.

So what went on last night?

The House passed a third proposal in two weeks approving government funding but again sought to undermine Obamacare. For the second time yesterday, the Senate rejected a House bill in a game of legislative ping-pong between the upper and lower chambers of Congress that had no winner.

Less than two hours before the shutdown deadline of midnight, the House began a process whereby it sought to start formal negotiations directly with the Senate over a short-term government funding bill.

The Democratic majority leader in the Senate, Harry Reid, said he would not resolve the differences with House Republicans “with a gun to our head,” making a government shutdown all but inevitable.

Earlier yesterday Obama blamed House Republicans for the failure to approve a short-term budget over their opposition to measures that were already law, saying that it was the “height of irresponsibility.”

“One faction of one party, in one House of Congress, in one branch of government doesn’t get to shut down the entire government,” he said.

What does a government shutdown mean?

The failure to agree a federal budget means that hundreds of thousands of US public servants will be put on unpaid leave. An estimated 800,000 civilian workers out of 2.1 million will be affected.

More than 400 national parks and monuments, from Yosemite National Park in California to the Statue of Liberty in New York, will close to tourists.

Nasa will put almost all of its employees on unpaid leave, though staff will continue working at the space agency’s mission control in Houston to support the international space station.

The 1.4 million US military personnel were going to see their pay delayed until President Obama signed a bill, passed by Congress, into law late last night making them exempt from the shutdown.

The president and members of Congress will continue to be paid in the shutdown.

Yes, there have been 17 government shutdowns since 1976, the longest lasting 21 days over the 1995-1996 New Year period when President Bill Clinton faced off with the Republican Speaker of the House Newt Gingrich. Republicans were blamed for the shutdown and Clinton was re-elected in 1996.

Is this fiscal dispute new?

No. The tussles between Republicans and the White House over a federal budget have been going on since 2010 when the Democrats lost control of the House. The government came close to a shutdown in 2011 when they agreed a last-minute deal to cut spending. Tensions boiled over again over New Year when both sides faced the fiscal cliff but Republicans caved in and agreed to tax increases.

An influential grouping of far-right Tea Party members within the Republican Party joined forces with Texan senator Ted Cruz and pressed the Speaker John Boehner, the highest-ranking Republican in the House of Representatives, which the party controls, into opposing Obamacare.

Boehner had initially resisted efforts to link Obamacare to any agreement on a short-term budget fearing a backlash over an inevitable government shutdown against Republicans.

Concerned about a revolt from radical elements of his party ahead of primary elections where Republicans could face challenges from far-right candidates, Boehner caved to the pressure. The Republican leader had already been weakened by a succession of budgetary fights.

The shutdown is as much a consequence of a Democratic refusal to negotiate as a victory for House Republicans, many of whom were elected on anti-Obamacare/anti-government spending agenda.

Republicans believe that the law, which extends health insurance to 30 million Americans without it, will cost jobs as employers will be penalised if their staff are not covered by health insurance.

Employers have responded to the law by cutting worker hours to below 30 hours a week, the level at which companies with 50 or more employees are mandated to offer staff health insurance.

The White House is refusing to cave in to the Republican Party’s last-gasp attempts to derail the law and has said that Obamacare will start being rolled out to uninsured Americans from today.

Who will be blamed for the shutdown?

Republicans will take most of the blame, according to polls. Television news channel CNN found in a poll yesterday that 46 per cent of people would hold Republicans responsible for the shutdown, while 36 per cent would blame the president, despite 57 per cent saying that they oppose Obamacare.

Is agreeing a government budget the only battleground between the sides?

No. The US Treasury has warned that the government will run out of cash and be unable to borrow unless Congress approves an increase in the so-called debt ceiling of $16.7 trillion on October 17th.

House Republicans are working on separate legislation linking a defunding of Obamacare to any increase in the borrowing limit, an issue that the White House and Democrats will not negotiate on.

An unprecedented debt default by the United States would be even more damaging than a government shutdown as it will affect the country’s international credit rating and weak economy.