‘We have no strategy to combat Isis’ – Obama 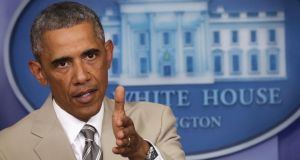 US president Barack Obama has said that he had not yet developed a strategy to combat Islamic State militants, months after the jihadist army, formerly known as Isis, erased the border between Iraq and Syria and more than a week after it beheaded an American citizen.

“We don’t have a strategy yet,” Mr Obama told reporters at the White House, indicating a reluctance to expand his bombing campaign into Syria.

The president said that he had asked defence secretary Chuck Hagel and Gen Martin Dempsey, the chairman of the joint chiefs of staff, to prepare “a range of options” for confronting Isis. But pushing back against fervent speculation that he is preparing to bomb the group in Syria, Mr Obama said his military plans would be limited to Iraq.

“Our core priority right now is just to make sure our folks are safe,” Mr Obama said as his national security team convened at the White House.

Administration officials have recently begun describing Isis in apocalyptic and near-hysterical terms, even as they decline to endorse additional military action against it, a discrepancy that has prompted confusion in Washington and beyond.

To the degree that Mr Obama’s strategy has a centrepiece, it consists of enlisting regional allies, and particularly Sunni Arab nations, to help in isolating and attacking Isis. Secretary of state John Kerry will soon leave for the Middle East to continue coalition-building.

Some current and former administration officials have expressed frustration with Mr Obama for not yet forming a comprehensive approach to Isis, and especially for not attempting to take territory in eastern Syria away from it. Others contend that the administration’s options are limited if it seeks not to Americanise yet another Middle Eastern war while still others have said they expect military operations against Isis to eventually expand in scope, mission and geographic reach.

Obama gave some indications that he is far from persuaded on attacking Syria, but also that his views have yet to solidify.

He portrayed US military action as less significant than Iraqi and regional investment in political reconciliation, a point frequently made last decade by US generals, albeit few who were sceptical of escalation in Iraq.

“The idea that the United States or any outside power would perpetually defeat Isis, I think, is unrealistic,” Mr Obama said yesterday.

“We can rout Isis on the ground and keep a lid on things temporarily, but then as soon as we leave, the same problems come back again. We’ve got to make sure Iraqis understand that in the end they are responsible for their own security.”

Yet he did signal an openness to “an international coalition providing additional air support” for Iraqi and Kurdish forces that have begun to take some territory away from Isis, a potential expansion of the air war. – (Guardian service)