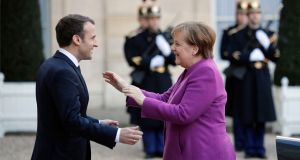 Emmanuel Macron welcomes Angela Merkel at the Elysee Palace in Paris: “Europe must present a united front,” says Dr Merkle. “When France and Germany propose things, they have a good chance of happening.” Photograph: François Mori

Germany, France and Europe waited more than six months for chancellor Angela Merkel to form her new coalition government, which was confirmed on Wednesday.

Merkel made the first trip of her fourth term to Paris, according to tradition between French and German leaders. She and President Emmanuel Macron kept journalists waiting at the Élysée Palace, as is Macron’s custom, for more than an hour for their joint statements late on Friday.

But even then, the waiting game continued, as Europe’s two most important leaders announced they would unveil a “road map for the refoundation of Europe” at the EU summit in June.

Macron expressed “all our joy” that Merkel’s efforts to form a government had finally borne fruit, and that she had been re-elected.

Europe has been “profoundly shaken” by Brexit and by “Italian elections which saw the rise of the extremes”, Macron said. The EU was feeling the consequences “of lasting economic difficulties and migratory challenges that we have not been able to totally address”.

Macron and Merkel expressed “solidarity” with the UK. Both condemned what the French president called “Russian intervention” in attempting to assassinate the former Russian spy Sergei Skripal in Britain.

“We denounce this terrifying attack with toxic nerve gas,” Merkel said. She asked for “international agencies” to react to this “extremely delicate situation”.

Germany had waited “for long years” for France to put its economic house in order, Macron said. “Europe has waited for years for the Franco-German couple to make proposals with the force it found at each important stage of Europe,” he continued. “We are ready.”

There was no mention of the high ambitions for the EU outlined by Macron last September. Macron wanted a finance minister for the euro zone, a separate parliament for the euro zone, and a European budget of “several GDP percentage points”. He has waited six months for German support, and will have to wait longer.

Presidential aides now say a sub-grouping of the EU parliament could serve as the euro zone assembly. Merkel told German television this week that Berlin was ready to contribute more to the EU budget, but not ready to “communitise” debt.

When Macron referred to “the need to rearticulate responsibility and solidarity”, he meant French fiscal sobriety and greater generosity on the part of Germany. He brought out the usual laundry list of policies on which Europe needs to make progress: migration, defence, trade, research, culture, education . . . He promised that the “clear and ambitious roadmap” would be apparent in June.

Merkel called her coalition agreement with the SPD “a new breakthrough for Europe”. France and Germany “always succeed when they worked hard at it”, she said. “Of course, we don’t always agree but France and Germany have already accomplished a great deal historically, and I absolutely want to get there. I am convinced we can do it. Europe must present a united front . . . When France and Germany propose things, they have a good chance of happening.”

It was important to stabilise the euro “over the long term”, Merkel said, though she did not say how. It was equally important “that our competitiveness be preserved and strengthened”. It was “imperative” that Europe arrive at a shared policy on asylum by June. “We must protect our borders,” she added.

Europeans “will be unbeatable if we are not disunited”, Merkel said. There would be meetings about meetings, an “intermediate meeting” in Brussels next week, a Franco-German meeting to organise the June summit. One couldn’t help feeling one had heard it all before.