US presidential election: Three things we learned in Iowa 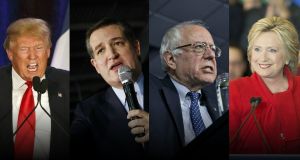 Billionaire Donald Trump lost to Texas senator Ted Cruz in the Iowa caucuses, while Hillary Clinton and Bernie Sanders were locked in a virtual tie after a hard-fought battle. Photograph: Composite/Bloomberg/AFP

Billionaire Donald Trump lost to Texas senator Ted Cruz in the Iowa caucuses, while Hillary Clinton and Bernie Sanders were locked in a virtual tie after a hard-fought battle.

Here are the three takeaway points from the first real test in the 2016 US presidential race:

Heading into the Iowa caucuses, the big question was whether Mr Trump, the businessman who has turned political convention on its head with his vitriolic, narcissistic presidential campaign, could convert the angry masses that attend his rallies into an electoral force.

The answer: sort of. Second place is not to be sneered at, although Mr Trump has and many others did, reminding him in the Twittersphere last night that he had in fact tweeted a quote in 2013: “No one remembers who came in second.”

For a man who promises to make America win again, it will not sit comfortably with him that after Iowa he can be called a loser. He under-performed his most recent polling figures, trailing Texan Ted Cruz, the Senate’s most conservative disrupter, by three points, 27.7 per cent to 24.3 per cent.

Mr Cruz showed that candidates cannot just rely on noisy, headline-grabbing rhetoric and that celebrity can only get you so far in politics. Real contenders must match big spending with building a well-organised, grassroots network and personal relationships with voters. By the time Iowans caucused last night, the Texan had almost 12,000 volunteers and well-prepared captains in the state’s 1,681 precincts.

Faced with a choice between Trump and Cruz, Iowans picked the dyed-in-the-wool conservative who appealed to evangelical Christians with his Scripture-quoting, constitution-defending attacks on Washington. To some, Trump was an unknown quantity: a Manhattan mogul in rural Iowa, a one-time Democrat muddling Scripture and confusing a church communion plate for a collection plate.

Mr Cruz’s dig that Trump represented “New York values” worked as his attack ads replayed the businessman’s “How stupid are the people of Iowa?” quote from a rally back in November. It created a disconnect with voters here who like to be wooed in person and fawned over. Mr Trump’s decision to skip the final debate before the caucus last week was, it is now clear, a misstep when voters needed to hear from him.

Mr Trump showed he could wow Iowans with fly-bys in his Boeing 757 and treat Iowan children to rides in his helicopter but he didn’t shake hands and rub shoulders with conservatives or criss-cross the state’s 99 counties meeting in diners, farm barns and community centres.

A high turnout had been expected to favour Mr Trump on the back of his profile encouraging new voters to caucus. The fact that the turnout was high - more than 180,000 Republicans caucused, beating a record of 121,354 set in 2012 - and Mr Trump still didn’t win showed the extent of Mr Cruz’s legwork in Iowa and his credibility as a candidate.

Hillary Clinton told supporters last night that she was “breathing a big sigh of relief,” suggesting that victory was hers in her hard-fought race with Bernie Sanders, the self-avowed democratic socialist. If a lead of one third of a percentage point represents a win in Iowa, then it shows how far Ms Clinton’s star has fallen since she was considered a year ago the runaway favourite to be the next Democratic nominee.

This midwestern frontier, a flyover state for most of the four-year presidential cycle, rejected Ms Clinton in favour of Barack Obama eight years ago and appears to have only reluctantly accepted her this time around. It was never meant to have been this close.

Correcting the mistakes of the 2008 campaign, Ms Clinton got up close and personal with Iowans, making direct appeals to voters in cosy town halls about her life-long record and experience, and her willingness to fight for America’s struggling middle class.

While last night’s caucus-goers certainly considered her the strong choice in terms of her experience and electability against a Republican in November’s presidential election, Sanders was overwhelmingly favoured as the more honest, trustworthy and caring candidate. In other words, he was more credible as the middle-class champion.

“It’s rare that we have the opportunity we do now,” Ms Clinton told her supporters, not explicitly claiming victory in her post-caucus speech. “To have a real contest of ideas. To really think hard about what the Democratic Party stands for and what we want the future of our country to look like.”

The caucus results show that Iowa’s Democrats are at least divided about where the party should be going. The vote represents a dramatic left-hand turn. Mr Sanders was right to claim victory too, coming from obscurity to viability in eight months, through an emotional and authentic campaign that has electrified grassroots liberals, particularly young voters, by railing against so much that Ms Clinton represents.

While she may trash his policies as unrealistic pipe dreams in contrast with her role as a “pragmatic progressive,” Sanders has shown that his ideas for universal health and free collection education are not so outlandish and that the left wants the party’s aims set higher.

Ms Clinton faces the prospect of another two weeks of hard questions about her candidacy as Sanders holds a strong lead in second-to-vote New Hampshire which holds a primary on February 9th.

The former secretary of state is considered best in campaigns when her back is against the wall. Well, Mr Sanders and Iowa have put her there. She could leave New Hampshire in 10 days with a loss and a draw: not exactly a glowing start for the one-time Democratic shoo-in.

Marco Rubio’s sharp response to a question at last week’s Republican debate about whether, as a Time magazine cover put it, he was “The Republican Saviour” was a clear hit with Iowa’s evangelical Christians. “There’s only on saviour and it’s not me,” he said. “It’s Jesus Christ who came down to Earth and died for our sins.” The results of the Iowa caucuses show he may yet come to the rescue of a Republican Party fearing the damage caused by the anti-immigrant rhetoric of a Trump or a Cruz to its hopes of retaking the White House.

Mr Rubio, the 44-year-old Cuban-American son of a barman and a maid, delivered the biggest surprise of caucus night, winning 23 per cent of the vote, trailing the swaggering Mr Trump who has dominated this election cycle by just a few thousand votes.

The Florida senator has secured one of the three all-important tickets out of Iowa that can keep him in the air. His poll numbers in New Hampshire are respectable, so this compelling third-place finish in Iowa will give him momentum that he sorely missed in recent weeks.

Moderate Republicans along with the anointing establishment faction like the look of Rubio. They believe he has the best chance of beating Ms Clinton in the November with his new generation-good, old generation-bad campaign along with his appeal to immigrants and minorities, a voting bloc deemed essential to win the presidency.

Mr Rubio appears to be the champion that the Republican establishment had hoped would emerge to break through the Cruz-Trump brand of seething divide-and-conquer politics. His finish in Iowa could convince the party and its big donors to give up on other runners in the establishment “lane” of the party, particularly former Florida governor Jeb Bush, but also Ohio governor John Kasich and New Jersey governor Chris Christie, and back Mr Rubio to the hilt.

Iowa has made the Republican primary a clear three-horse race.