US meteorologists predict thaw will set in by weekend

21 deaths reported from arctic blast that affected about 190m people 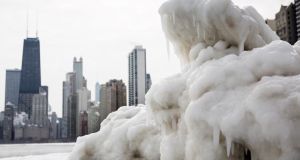 The Chicago skyline is seen behind a large chunk of ice near North Avenue Beach yesterday as cold temperatures remain with wind chills hit minus 35 degrees. Photograph: AP/Andrew A Nelles)

The Arctic blast that brought record low temperatures to many parts of the United States this week appeared to be loosening its grip yesterday, with meteorologists promising a far- reaching thaw by the weekend.

But experts warned that many areas would remain below freezing despite yesterday’s warm-up, and that travel delays from cancelled flights and rail disruptions caused by the so-called polar vortex could still be expected.

Officials reported at least 21 deaths since Sunday due to the extreme cold, including those of several people who collapsed while shovelling snow. Others, including a one-year-old boy in Missouri, were killed in vehicle collisions.

Temperatures in the 48 states that make up the contiguous United States dipped to an average of minus 11 degrees overnight on Tuesday, affecting an estimated 190 million people, according to research scientist Dr Ryan Maue of website weatherbell.com. In a phenomenon forecasters said was not exceptional, all 50 states saw freezing temperatures at some point on Tuesday. That included Hawaii, where it was minus 8 degrees atop Mauna Kea, a dormant volcano.

Even vegetable and citrus growers in Florida, usually immune to worst of the winter’s weather, were taking extra measures to protect crops, while many schools in the northeast of the country remained closed. Winter weather advisories remained in place yesterday for Arkansas, Kansas, Mississippi, Missouri, Oklahoma and Tennessee.

Maue said the icy blast brought temperatures that could be expected “once every one or two decades” and its size and magnitude were unusual but not unprecedented.

“The wind made it much, much worse and that’s what people will remember from this,” he said.

Reprieve
The reprieve from the polar vortex will come from the southwest, where a building high- pressure area appeared set to push the frigid air back towards the north and east, over parts of Canada and across the Atlantic.

Alex Sosnowski, senior meteorologist at accuweather.com, said central areas of the US would be the first to experience the warming trend. Over the central states, south and northeast, less wind yesterday would make for less harsh and less dangerous conditions, he wrote.

“By the weekend, temperatures over most areas affected by the Arctic cold will reach average or above-average levels for the middle of January,” he said. Temperatures were forecast to reach 10 degrees from St Louis to Cincinnati and New York City this weekend, he added.

The freezing air, however, is likely to be followed by heavy rain in the northeast, including New York, where Tuesday’s low of minus 15.5 degrees beat the previous record low set of minus 14.5 degrees set in 1896.

Elsewhere, from Massachusetts to the southern states of Alabama, Arkansas, Tennessee and the Carolinas, temperatures remained in single digits or barely reached the teens.

Blizzard warnings
More than two feet of snow fell in Buffalo, New York, which received its first blizzard warnings for 20 years. In South Carolina, electricity companies used rolling blackouts to cope with the extra demands on energy for heating, and in Indiana more than 10,000 customers remained without power early Wednesday, a quarter of the total nationwide. Meanwhile, four days of weather disruptions for the airlines lifted the number of cancelled flights to more than 11,000.

According to accuweather’s long-range weather expert Paul Pastelok, the US has probably not seen the last of the polar vortex, a large cold storm pushed south from the Arctic over the last week.

“The clock will be ticking on the upcoming January thaw,” he said. “After a relatively mild middle part of January, we are likely to experience a return of Arctic blasts later in the month.” – (Guardian service)