US Letter: Low turnout at state elections poor guide to 2016 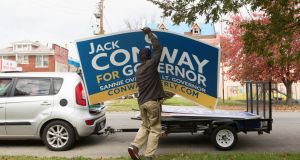 A California state politician, a Democrat from the San Francisco Bay area, wants a Bill passed that would allow people to take selfies while casting their votes and to share these on social media.

Marc Levine, a state assembly man in Sacramento, said this week that being able to tweet a photo of yourself casting your ballot might encourage voter participation. Critics say that breaching the secrecy of the ballot box might lead to vote-buying.

Some states, such as Maine, Oregon and Indiana, allow snapping at the polls, but whether ballot-box selfies lead to increased voter turnout remains to be seen. Off-year elections, as this week showed, do not score anything near on the turnout scale what the blockbuster presidential elections achieve.

Tuesday’s state and local elections followed the same low turnout pattern of last year’s midterm elections, in which Republicans won control of the US Congress. Republicans fare better outside presidential years as white, older and conservative voters are consistent voters.

Just 30 per cent of voters cast a ballot in this week’s hard-fought race for Kentucky governor, in which Republican Matt Bevin beat the state’s attorney general, Democrat Jack Conway.

This isn’t far off the 36 per cent turnout in the November 2014 midterm elections, the lowest level since the second World War, but is way off the 61.6 per cent who voted in 2008 in Barack Obama’s first presidential election, the highest turnout since 1968.

The Kentucky win gives Republicans their 33rd governorship, a net gain of 12 during the Obama years. Bevin, a conservative Tea Party-backed businessman who challenged the now Republican Senate leader Mitch McConnell in a primary last year, came from behind in the polls to become only the second Republican governor of Kentucky in 40 years.

He was an outsider winning in “the year of the outsider,” as the Democratic Governors Association put it, pointing to the “unexpected headwinds of Trump-mania”.

It’s hard to extrapolate too much from this result to the 2016 race. Kentucky has been a ruby-red Republican state in presidential elections; Mitt Romney scored 60 per cent of the vote here in 2012. Bevin campaigned hard against the Affordable Care Act, better known as Obamacare, which may encourage others to target a law hated by small- government conservatives.

The White House has held up Kentucky as one of the success stories of healthcare reform, as Obamacare and the expansion of Medicaid have brought the proportion of the population without insurance from 20 per cent down to 9 per cent in one of the poorest states in the country.

Elsewhere, Republicans scored an easy re-election in the governor’s race in Mississippi and denied Democrats a one-seat gain in Virginia for control of the state’s senate and a chance for governor Terry McAuliffe to secure the legal muscle to push through his progressive agenda.

This raises questions about whether McAuliffe, a fundraising powerhouse for the Clintons over the years, can deliver this key swing state for the party’s expected nominee in 2016. Again, a higher turnout at the presidential election should make this purple state a toss-up.

Former New York mayor Michael Bloomberg injected millions into the Virginia elections through his gun-control group, Everytown for Gun Safety, in an effort to win back the state’s senate for the Democrats. McAuliffe enlisted Andy Parker, the father of television news reporter Alison Parker, murdered live on air in August, and managed to retain a hotly contested seat being vacated by a retiring Democrat. But even with this backing, Republicans held on, showing the fight that Clinton has on her hands in Virginia with her proposals to tighten gun controls.

There were other wins on conservative issues on Tuesday. Ohio voters rejected a proposal to make marijuana legal, while, in Texas, a city law known as Houston’s Equal Rights Ordinance, or Hero, designed to protect gay, lesbian and transgender citizens, was rejected by 61 per cent to 39 per cent after a bitterly fought campaign in which opponents claimed the measure, the “bathroom ordinance,” would allow sexual predators into women’s toilets.

The turnout in that vote was double that of the city’s last three local elections.