US has threatened progress by not blocking release of tapes, says journalist

‘The peace process has been endangered’ 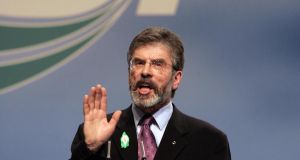 Journalist Ed Moloney, one of the researchers behind the Boston College oral history project, has criticised the Obama administration for endangering the Northern Irish peace process by not preventing the release of project interviews with former IRA members to police investigators.

Interviews that were carried out by the project team and obtained by the Police Service of Northern Ireland are believed to have led to the arrest of Sinn Féin leader Gerry Adams in connection with the 1972 abduction and murder of widowed Belfast mother-of-10 Jean McConville.

Fraudulent
Speaking from his home in the US, Moloney said that the US subpoena process used to obtain the interviews was fraudulent because it falsely stated, based on a 2010 newspaper report in Northern Ireland, that former IRA member Dolours Price had admitted her involvement in Mrs McConville’s murder in an interview that she had given as part of the Boston project.

The US department of justice failed to carry out sufficient checks on this information in the UK’s legal action to secure the tapes, said Moloney, and this has “ended up with the architect of the IRA’s peace process being questioned about one of the most notorious murders of the Troubles”.

“The peace process, which was created in large measure by the predecessors to the Obama White House, has been endangered,” he said.

Challenge
Moloney and his fellow researcher, the former IRA member and academic Anthony McIntyre, unsuccessfully challenged the UK’s attempts to obtain the interviews right up to the US supreme court and 11 excerpts of 85 interviews with seven former IRA members were handed over to police.

He said it was “probably unlikely” that Mr Adams, who has said he had no role in the murder, would be convicted on the basis of the Boston interviews given that they are hearsay evidence.