Toll of disease on Trump may raise deep questions

If president’s Covid-19 worsens, campaign will weaken and succession may loom 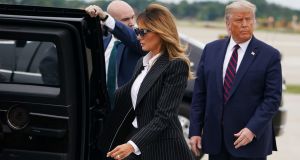 US president Donald Trump and first lady Melania Trump: diagnosis takes him away from the campaign trail at a crucial time. Photograph: Mandel Ngan

The news that Donald Trump and his wife Melania have tested positive for coronavirus has rocked the US presidential campaign.

Trump announced the news in the early hours of Friday, after earlier confirmation that Hope Hicks, one of his closest aides, had tested positive.

The question of how this plays politically will depend on how his condition evolves. While some patients suffer only mild symptoms, others’ medical situation can deteriorate rapidly. British prime minister Boris Johnson was admitted to hospital 10 days after he was initially diagnosed.

This implies that he contracted the disease some days ago. There were unconfirmed reports that, to those close to him, the president appeared lethargic on Wednesday and Thursday. The fact his campaign rally on Wednesday night in Minnesota finished after 45 minutes – about half the length of most of his events – also raised concerns.

For a president who has repeatedly played down coronavirus, his diagnosis could play two ways. If he exhibits only mild symptoms, he may see it as vindication of his claim that Covid-19 is no worse than the seasonal flu.

But if his condition deteriorates, fundamental questions will be raised about his handling of the pandemic, which has claimed the lives of more than 200,000 Americans. As recently as Tuesday he mocked Joe Biden, at their debate in Cleveland, for excessive mask-wearing. “Every time you see him he’s got a mask. He could be speaking 200 feet away . . . and he shows up with the biggest mask I’ve ever seen.”

Biden’s negative test on Friday means many Americans are likely to view his cautious approach to the virus as wise.

Should Trump fall seriously ill, the issue of succession also arises. The 25th amendment to the constitution – added after the assassination of John F Kennedy in 1963 – states that the vice-president assumes the role of commander-in-chief if the president becomes incapacitated.

The president would have to send a formal notice to the House and Senate stating he was “unable to discharge the powers and duties of his office”, though a clause does allow for a transfer without his consent. While Mike Pence tested negative on Friday, if he too were to become incapacitated, the second in line to assume the office of the presidency is speaker of the House of Representatives, Nancy Pelosi.

In any event, Trump’s diagnosis takes him away from the campaign trail at a crucial time. His campaign team confirmed that all previously announced events featuring the president would be postponed or switched to virtual events.

At the same time, Biden is continuing with his schedule, appearing in Michigan on Friday – an ironic turn-of-events given that Trump had labelled his opponent “hidin’ Biden” for not being more present on the campaign trail.

The development also shifts the focus on to the coronavirus pandemic – a topic the Trump team has been eager to move past in the final weeks of the campaign but Biden has been keen to highlight.

Trump’s contraction of Covid-19 also threatens to upend business in Washington. Republican senator Mike Lee, who accompanied supreme court nominee Amy Coney Barrett during her meetings with senators this week, has tested positive. Lee is one of 22 senators on the Senate judiciary committee, which is scheduled to begin confirmation hearings for the supreme court vacancy next week. Barrett herself has tested negative.

Capitol Hill has had minimal protections against the virus in place. Though mask-wearing is required on the House floor, it is not required in the Republican-controlled Senate. As evidenced by Minister for Foreign Affairs Simon Coveney’s multiple in-person meetings this week on the hill, social distancing is limited and there is no testing or contract-tracing system in place.

As Washington awaits to learn the full pool of people who may have been infected, the implications go far beyond the presidential campaign.