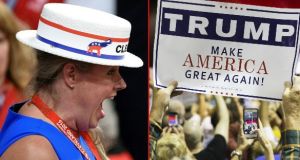 The average household income of a Trump voter in the primaries was about $72,000. Photographs: Getty Images

Mike Davis drove four hours north from Atlanta, Georgia to hear Donald Trump speak in Asheville, North Carolina last month. Standing in the long queue outside the Trump rally in a sports arena, he explained why he was supporting the Republican presidential nominee.

“He wants to make America first. That’s what we want. We don’t mind open borders when they come in here legally but we are just letting tens of thousands of refugees that my tax dollars just go to; there are American people suffering that need programmes,” he said.

“There are not going to be enough jobs to go around. It is like running a business. I don’t have a money machine in my business where I just print money. It don’t work that way.”

The 55-year-old self-employed businessman is typical of many of the Trump supporters that attend his rallies, particularly in southern states such as North Carolina and Florida: well-off Republicans angry that the party they have voted for all their lives has morphed into an out-of-touch Washington-centric elite that neither understands or represents their interests.

Just count the number of expensive cars and pick-up trucks in the traffic heading into a Trump rally in Florida and it is easy to gauge how the businessman’s support stretches far beyond the blue-collar workers of run-down industrial towns of the north.

On my travels on the election campaign, I have come across former Wall Street executives in the northeast, wealthy retired professionals in the south and rich suburban women in the midwest all backing the businessman. He has a broad church of support. 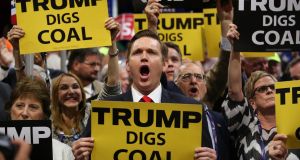 The rise of Trump has been characterised on many occasions as the revolt of America’s working-class whites, including the transformation of Reagan Democrats to Trump Republicans, mostly non-college educated white voters who feel abandoned by the Republican Party as they were let down by the economic policies of the Democratic Party in the past.

Earlier this year, data cruncher Nate Silver, of the forecasting website Five Thirty Eight, studied exit poll data on voters in the presidential primaries and found that Trump’s supporters were better off economically than most Americans.

The average household income of a Trump voter in the primaries was about $72,000 (€66,000) – lower than the $91,000 of supporters of moderate Republican John Kasich but higher than the national average of $56,000 and $61,000 for the supporters of Democratic candidates Hillary Clinton and Bernie Sanders.

A study by Gallup economist Jonathan Rothwell published last month captured the mix of support that Trump enjoys. His paper, based on 87,000 interviews, confirmed most poll findings: the businessman’s supporters are less educated and more likely to work in blue-collar occupations but they are relatively high earners. Most interesting of all, he found that those who view Trump favourably had not been disproportionately affected by trade or immigration.

There is undoubtedly evidence of this in the eastern fringes of lily-white Ohio, a Trump stronghold in an important swing state hammered by the decline in US manufacturing.

In a Republican campaign office in Lisbon, Ohio, Gary McCoy and his wife Candace, former construction company owners whose business collapsed in line with the economic fortunes of their area, told me last week of how their children had to leave the state to find jobs. They expressed unhappiness about the number of immigrants where their son lives in Minnesota.

“Trump is going to stop bringing in all these refugees. They have already bombarded our son’s city,” he said of Minneapolis-St Paul and the Somali community in the Twin Cities.

“You go into Walmart, you can’t get help and half of them can’t even talk to you.”