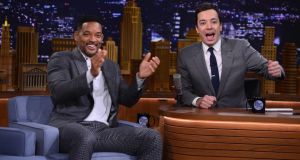 
A performance by U2 against a shimmering Manhattan sunset on the roof of NBC’s 30 Rockefeller Center building, heralded another change in the US late-night talk show fraternity.

Comic Jimmy Fallon (39) took over from veteran host Jay Leno (63) and brought the Tonight Show , a six-decade institution of American television, back to New York, where it originated, after a 22-year hiatus. Fallon is the show’s sixth host – or seventh if you count Leno being replaced briefly by Conan O’Brien whose tenure was cut short in 2010 by a crash in ratings.

Leno’s start-stop-start retirement ends simmering tensions between NBC executives and their employee who took over from Tonight Show legend Johnny Carson in 1992.


Younger adults
Fallon’s succession to the highest-profile late-night chat- show slot marks NBC’s attempt to lure younger adult viewers, the segment of America’s watching public that commands the highest payments from advertisers. Fallon alluded to the fickle nature of chat-show politics and NBC’s attempt to find an heir to Leno in his first joke on Monday night. “I’m Jimmy Fallon and I’ll be your host – for now.”

Fallon earned his comic stripes working on another staple of the NBC broadcast schedule, Saturday Night Live . He moves from NBC’s Late Night , a chat show he took over from O’Brien and hosted for almost five years.

Even though Leno’s ratings with almost four million viewers were higher than his rivals, the show’s advertising revenue – more than $125 million (€92 million) in 2013 – was down 40 per cent on a half-decade earlier. TV networks gauge performance in the most lucrative 18-49-year-old viewer bracket. Within this, ABC’s Jimmy Kimmel Live and Late Night with Jimmy Fallon have outpaced Leno and long-tenured David Letterman.

Kimmel’s popularity surge, on television and online where the most popular snippets of his show circulate long after being originally broadcast, was a factor in NBC’s decision to push Leno out again and promote a younger replacement for the 11.30pm slot.


Celebrity cameos
Within hours of his maiden show, featuring celebrity cameos from Robert De Niro, Tina Fey and Lady Gaga among others, Fallon’s Evolution of Hip- Hop Dancing sketch with Hollywood star Will Smith had already been viewed more than 200,000 times on YouTube.

It was a strong start but in this fast-changing social media age, Fallon, or any other new host, is unlikely to be able to beat Carson’s 4,531-show run over 30 years.