Flowers pile up at the site of Tuesday's deadly balcony collapse near the University of California-Berkeley. Video: Reuters 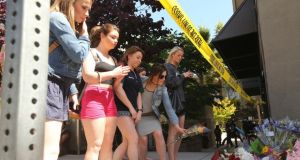 Mourners place flowers at the scene of the balcony collapse near the University of California Berkeley campus. Photograph: Jim Wilson/The New York Times

Medical staff are closely monitoring two Irish women still in a critical condition after they fell from a fourth-floor collapsed balcony at a 21st birthday party in Berkeley, California.

Hannah Waters and Aoife Beary, both from Dublin, are expected to remain critical over the coming days as they are treated at Highland Hospital in nearby Oakland.

The students were celebrating Ms Beary’s birthday at an apartment on Tuesday when the accident occurred.

Berkeley mayor Tom Bates said last night the balcony collapse primarily was caused by water-damaged wood. Mr Bates said initial findings by investigators suggested the wood was not properly caulked and sealed when the building was being constructed.

It is believed the supports were damaged by moisture as a result. “More than likely, it was caused by rain and water damage that was caused to the support beams,” the mayor said.

The families of the Ms Waters and Ms Beary were among the first relatives to arrive in the San Francisco Bay Area from Ireland.

The two Irish women are among seven people injured in Tuesday’s accident.

The names of the others were confirmed as Clodagh Cogley, Niall Murray, Seán Fahey, Jack Halpin and Conor Flynn. They were in a stable condition yesterday. Two are said to have been injured seriously and underwent extensive surgery on Tuesday.

All seven are aged between 20 and 22 and from Dublin with the exception of one student who is from Donegal.

The parents of Olivia Burke, one of the six killed when the balcony collapsed at the Library Gardens student accommodation complex, flew in on Tuesday evening. The remaining parents arrived on the direct flight from Dublin yesterday.

Relatives of Ms Burke and her Irish-American cousin Ashley Donohoe, who was also killed in the balcony collapse, visited the scene of the tragedy.

They surveyed the flowers laid at a corner of the Kittredge Street building and, from the other side of the street, the exposed beams of the fourth-floor collapsed balcony.

The bodies of the deceased are being held at the Alameda County’s mortuary in Oakland. Authorities are hoping to repatriate the bodies of the five Irish-resident victims as quickly as possible, ideally by the weekend.

Tributes to the dead and injured came from their former teachers and fellow students yesterday and the Dáil was adjourned for two hours as a mark of respect. TDs and Senators are to hold a special service for the victims. Minister for the Diaspora Jimmy Deenihan will travel to California.

Philip Grant, the Irish Consul General based in San Francisco, said the families where in shock.

He said around 40 people attended the 21st birthday party on the fourth-floor of the student accommodation building. The apartment on Kittredge Street, near the University of California Berkeley campus, was rented in the names of Ms Walsh, Ms Burke and Ms Beary.

The newspaper tied the accident to previous “high-profile episodes” involving J-1 visa students in “drunken partying and the wrecking of apartments” in California, saying that the programme had become “a source of embarrassment for Ireland.”

Former president Mary McAleese wrote a letter of complaint to the New York Times, saying that it “should be hanging its head in shame at how outrageously and without the remotest evidence it has rushed to judgment on those deaths.”

In response to the backlash, a spokeswoman for the newspaper said: “It was never our intention to blame the victims and we apologise if the piece left that impression.”