US Letter: ‘Facts’ at times come at expense of those struggling with most horrific tragedies 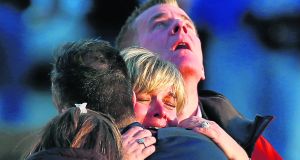 After six-year-old Noah Pozner was murdered along with 19 other school children and six adult staff in the mass shooting at Sandy Hook primary school in Newtown, Connecticut on December 14th, 2012 – four years ago on Wednesday – his mother insisted on an open coffin.

Veronique Pozner wanted people and particularly Connecticut’s governor Dannel Malloy to see her child’s shiny hair, his long eyelashes and the cloth on his lower face where his lower mouth had been before his jaw was shot off.

The boy suffered multiple gunshot wounds in gunman Adam Lanza’s rampage and his mother insisted on later describing his injuries in detail, needing it to be “real” for politicians like Malloy if they were ever to pass gun controls to prevent such a tragedy recurring.

While the boy’s mother has pushed hard for legislative change, his father Lenny Pozner has taken on a different fight.

The Connecticut massacre has spawned a host of internet conspiracy theories from so-called Sandy Hook truthers who claim the Obama administration or anti-gun groups staged the shooting with the help of actors, government officials and the “mainstream media” to force through gun controls.

Some even claim the children never existed or have been hidden by the government.

Pozner, who has divorced his wife since the Connecticut massacre and moved to Florida, has run an anti-hoaxer movement, taking on internet trolls who malign his son’s memory.

He scans the internet for illegal use of his family photographs and has them removed on warnings of copyright infringements.

He has set up a website – www.honr.com – demanding action against online abusers in the “truth movement” and protection for those grieving victims of highly publicised mass killings.

He has also called for legal consequences against YouTube and Facebook for creating a platform for the conspiracy theorists.

“People don’t understand what trolls are,” he said. “If you don’t feed them, they don’t just go away.”

His stance has drawn a stream of hateful online abuse but it took a more serious turn when he received death threats in January from a woman who believed the Sandy Hook attack was a hoax.

Lucy Richards (57), from Tampa, Florida, was arrested on Monday and charged with making death threats over the phone and internet.

Pozner was not identified in the federal indictment but he confirmed to the Tampa Bay Times newspaper that he received the threats.

A prosecutor described Richards as a Sandy Hook “truther”.

Jones has claimed the school “was closed years before” the shooting, that CNN news anchor Anderson Cooper reported on the shooting “using a green screen” and that the parents were actors.

The 42-year-old Texas radio host is the father of the “9/11 Truth” movement, claiming the September 11th, 2001 attacks and the Oklahoma City bombing in 1995 were inside jobs.

Donald Trump helped draw this fringe hoaxer from the far reaches of the internet into the national media mainstream when, a year ago, the then Republican presidential candidate was interviewed on InfoWars.

“Your reputation is amazing. I will not let you down,” Trump told him on his show.

Jones’s YouTube channel has 1.8 million subscribers and his videos have been viewed more than a billion times.

A day before Richards’s arrest in Florida, a North Carolina man was arrested after he entered a Washington DC restaurant, Comet Ping Pong, armed with a military-style assault rifle looking to investigate for himself another fake online story called “Pizzagate”.

This internet-fuelled hoax was based on a claim that Hillary Clinton and her campaign chairman John Podesta ran a child sex ring in the basement of the pizzeria. (It doesn’t have a basement.)

“The intel on this wasn’t 100 per cent,” the gunman, Edgar M Welch (28), told New York Times journalist Adam Goldman from jail, acknowledging that no children were being held in the building.

At a time when trust in the media is at a record low, the line between fact and opinion has become blurred in fake news propagated on social media websites such as Facebook and Twitter.

Gallup found in September that 32 per cent had a great or fair amount of trust in the media compared with 72 per cent in the mid-1970s, a golden era of investigative journalism amid the Vietnam War and Watergate scandal.

This has allowed Trump, Jones and other post-truthers to profit using their own brand of “facts”, in some cases at the expense of grieving parents struggling to deal with the most horrific of tragedies.