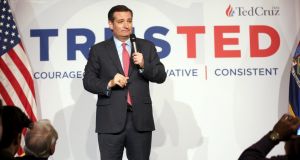 Ted Cruz speaking at a rally in New York. The senator from Texas and candidate for the presidential nomination received an endorsement from former candidate Jeb Bush. Photograph: Reuters/Pearl Gabel

Texas senator Ted Cruz received a boost in his effort to rally Republicans behind his bid to beat Donald Trump in the Republican presidential race after Jeb Bush endorsed him for the party’s nomination.

Mr Bush, the former Florida governor who abandoned his own White House ambitions after failing to gain any traction, said he was backing Mr Cruz “for the sake of our party and country”, as he took aim at Mr Trump, the clear Republican frontrunner.

“We must move to overcome the divisiveness and vulgarity Donald Trump has brought into the political arena,” he said, “or we will certainly lose our chance to defeat the Democratic nominee and reverse president [Barack] Obama’s failed policies.”

Mr Bush is the second high- profile Republican establishment figure to back Mr Cruz, who is disliked by the party elite but is seen as the most likely to defeat Mr Trump for the nomination. GOP leaders believe the billionaire property tycoon threatens the party’s future.

Mitt Romney, the 2012 Republican nominee, last week offered his support for Mr Cruz instead of John Kasich. The more moderate Ohio governor has only won his home state and remains far behind Mr Trump and Mr Cruz in terms of delegates.

Mr Cruz also faces a steep climb to reach the 1,237 delegates needed to win the nomination without going through a contested convention.

Many establishment Republicans believe Mr Trump and Mr Cruz would lose the November election to Hillary Clinton, the frontrunner for the Democratic nomination. Still, they conclude that Mr Cruz will do less lasting damage to the party.

In a statement on Mr Cruz’s website, Mr Bush described the senator as “a consistent principled conservative who has demonstrated the ability to appeal to voters and win primary contests”.

Mr Bush quit the race last month after he struggled to break through in the early contests. This was despite raising well over $100 million for his campaign and being viewed as the establishment favourite for the Republican ticket for months before launching himself into the race.

Mr Trump and Mrs Clinton both won big victories in the Arizona primaries on Tuesday, but Mr Cruz won Utah, a state with a large Mormon population, with the help of Mr Romney who is a member of the church.

Mr Romney, one of the loudest critics of Mr Trump in the party establishment, recorded “robocall” telephone messages supporting the Texas senator.

While Mrs Clinton won in Arizona, her rival for the Democratic nomination, Bernie Sanders, registered a resounding victory in Utah and added a second triumph in Idaho, a state in which only Democrats were holding a contest on Tuesday.

However, Arizona was the largest delegate prize on Tuesday and was also the most fiercely contested. Mr Trump, Mr Cruz, Mrs Clinton and Mr Sanders all criss-crossed the state in recent days in last-ditch efforts to shore up support.

The Grand Canyon State was the largest purely winner- takes-all state left in the Republican calendar, and Mr Trump’s victory ensured he won all 58 delegates.

Like Mr Trump, Mrs Clinton had a large margin of victory, with 60 per cent to Mr Sanders’s 38 per cent.

At her victory speech at a rally in Seattle, the former secretary of state contrasted what she claimed would be her “strong, smart and above all steady” leadership in the White House with the reaction of Republicans to the attacks in Brussels earlier in the day.

Mr Trump, who recently said the US should reconsider its involvement in the Nato defence alliance, a cornerstone of Washington’s foreign policy, responded to the terrorist atrocity by repeating his call to waterboard terror suspects.

Appearing at a rally in San Diego before the Utah and Idaho results were in, Mr Sanders did not mention his loss in Arizona and instead focused on his expected wins.

“We have now won 10 primaries and caucuses,” a hoarse- sounding Mr Sanders told supporters. “And unless I’m mistaken, we’re going to win a couple more tonight.”

His forecast was correct, and the strength of his victories in Utah and Idaho will likely energise his supporters.

The senator from Vermont is also projected to perform well in Alaska, Hawaii and Washington, the last three Democratic states to hold contests in March. But those wins are unlikely to put a decisive dent in Mrs Clinton’s lead delegates. – Financial Times/Reuters