Trump vs Clinton: 10 key moments from first US presidential debate 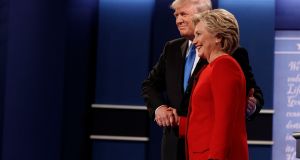 It was not long into the debate before Donald Trump and Hillary Clinton went for each other with some vicious attacks as the Democrat tried to get under her Republican opponent’s skin.

On many occasions, she succeeded, dominating the most significant moments of the first presidential debate with what well-rehearsed retorts to some of his expected lines of attack and carefully prepared statements on the businessman’s most inflammatory past statements.

Here are the 10 most important moments of the first encounter between the candidates.

The Republican enjoyed his strongest moments early in the debate, challenging Ms Clinton on the economy and her support of free trade agreements for costing American manufacturing jobs. Mr Trump accused the Democrat of changing position on the Trans-Pacific Partnership (TPP), the proposed trade deal between the United States and 11 other countries around the Pacific. He pointed out that Ms Clinton once called the TPP the “gold standard of trade deals” on an issue that will play well with his biggest support base: white blue-collar workers. Ms Clinton responded: “Well, Donald, I know you live in your own reality, but that is not the facts.” It was a point for Mr Trump.

In a discussion on African-American communities, Mr Trump criticised Ms Clinton for staying at home to prepare for the debate while he visited the inner-cities of Philadelphia and Detroit. The Democratic presidential nominee flipped the discussion in her favour with one of her biggest moments of the night, drawing a cheer from the audience: “I think Donald just criticised me for preparing for this debate. And, yes, I did. And you know what else I prepared for? I prepared to be president. And I think that’s a good thing.”

Trump: “smart” about not paying tax

Mr Trump attempted to counter-punch during a volley of Ms Clinton jabs when she queried him on why he was not willing to release his tax returns. She noted that in a couple of years when he had to hand over his tax returns to secure a casino license the records show he did not pay any federal income tax. “That makes me smart,” he said. On another occasion, he admitted: “I take advantage of the laws of the nation because I’m running a company,” after she queried him on his business record and bankruptcies. These statements would badly hurt any other candidate.

Blaming all the world’s problems on Clinton

The Republican launched a flurry of attacks on Ms Clinton early on in the debate, on trade, Islamic State, taxes and the economy. She joked: “I have a feeling by the end of this evening I’m going to be blamed for everything that’s ever happened.” Mr Trump jumped in, saying. “Why not?” She replied: “Why not? Yeah. Why not? Just join the debate by saying more crazy things.”

Debate moderator Lester Holt asked Mr Trump why it took him so long to acknowledge that president Barack Obama was born in the United States, referring to the Republican’s recent reversal on the so-called “birther” conspiracy theory that he has pushed for years. “Nobody was pressing it, nobody was caring much about it,” said Mr Trump, claiming credit for forcing Mr Obama to release his birth certificate. “Well, just listen to what you heard,” said Ms Clinton in response. She accused him of pushing “this racist lie that our first black president was not an American citizen” and for having “a long record of engaging in racist behaviour.” Mr Trump countered weakly, saying that he opened up his golf resort in Palm Beach, Florida to African-Americans and Muslims.

Ms Clinton attacked the Republican’s claim that his business record would make him a good president by accusing him of “stiffing” dishwashers, painters, glass and marble installers who had worked for his businesses. She referred to an architect in the audience for the debate who did not pay him in full for designing one of his clubhouses. “Maybe he didn’t do a good job and I was unsatisfied with his work,” Mr Trump’s comment made him look small.

The Republican nominee continued to claim that he opposed the Iraq war. He insisted that he was against the invasion, even though he told radio host Howard Stern in 2002, prior to the invasion, that he was in favour of it. “I did not support the war in Iraq. That is a mainstream media nonsense put out by her,” said Trump. “The record shows otherwise,” said debate moderator Holt. Mr Trump said Ms Clinton had been “fighting ISIS your entire adult life.” The militant group has only been around for several years. “Please, fact-checkers, get to work,” said Ms Clinton.

Asked about his campaign comment that Ms Clinton did not have “a presidential look,” Mr Trump changed the subject quickly. “She doesn’t have the look, she doesn’t have the stamina,” he said. Ms Clinton, referring to her record as US secretary of state, replied: “Well, as soon as he travels to 112 countries and negotiates a peace deal, a ceasefire, a release of dissidents, an opening of new opportunities and nations around the world, or even spends 11 hours testifying in front of a congressional committee, he can talk to me about stamina.” It was a big score for Ms Clinton.

Who’s got the right temperament?

Asked him about his judgment, Mr Trump bragged in typical boastful fashion that he has “a much better temperament than she has” and that it was “his strongest asset, maybe by far.” Referring to a recent campaign event, Mr Trump said that she was “totally out of control.” When Holt allowed her to respond, she gave an exasperated “Whew! Okay!” and went on to attack him, saying his “cavalier attitude towards nuclear weapons is deeply troubling.” She resurrected a popular campaign jab: “A man who can be provoked by a tweet should not have his fingers anywhere near the nuclear codes.” Mr Trump replied: “That line’s getting a little old, I must say.” She responded: “It’s a good one, though. It well describes the problem.”

Near the end of the debate, Clinton reminded viewers of the Republican nominee’s past remarks about women and how he had called them “pigs, slobs and dogs.” She then referred to a former Miss Universe Alicia Machado who has claimed she was bullied by the businessman when he took over the pageant in 1996, claiming he called the Venezuela beauty contested “Miss Piggy” and “Miss Housekeeping” because she was a Latina. The Democrat said that Machado had since become a US citizen and would be voting for Ms Clinton. Mr Trump bizarrely defended his comments about women saying that he was talking about the comedian-actress Rosie O’Donnell: “I think everyone would agree that she deserves it.”