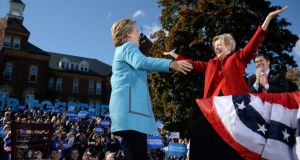 Hillary Clinton and Senator Elizabeth Warren at a rally Monday at St Anselm College in Manchester, New Hampshire. “I just want to be official here: I’m with her. Are you with her?” Warren asked the enthusiastic crowd. Photograph: Robyn Beck/AFP/Getty Images 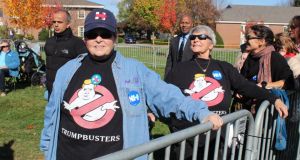 Donna Butler (63) at the rally with Hillary Clinton and Massachusetts senator Elizabeth Warren. “We want to make sure that [Clinton] has a sure, clear win here in New Hampshire and across the United States.” Photograph: Simon Carswell 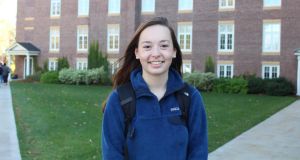 Bridget Philipps (19) at St Anselm College in Manchester, New Hampshire on Monday. “I am going to vote for Hillary Clinton because I have Democratic beliefs and I am strongly opposed to Donald Trump and I don’t want him to win.” Photograph: Simon Carswell 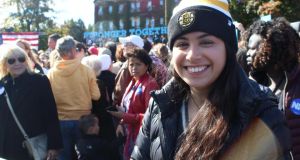 Alex Farrohi (18) from St Anselm College attending the rally on campus for Hillary Clinton. “It is a hard election. I think previous ones haven’t been this difficult and there hasn’t been so much controversy.” Photograph: Simon Carswell

In New Hampshire, the “Live Free or Die” state in the northeastern US, young Democrats have found a happy electoral compromise between freedom and death, and it is all down to Donald Trump.

The Republican presidential nominee is a turnoff for the young female voters who came out in such large numbers to support Bernie Sanders, the socialist senator from neighbouring Vermont, in the Democratic primary election. Trump is such a turnoff, in fact, that they have come around to Hillary Clinton.

“I am going to vote for Hillary Clinton because I have Democratic beliefs and I am strongly opposed to Donald Trump and I don’t want him to win,” said Bridget Philipps, a freshman environmental science student between classes at St Anselm College in Manchester.

The students mixed with many older women wandering the leafy campus on a New England autumn afternoon as crowds gathered for a rally. This was a joint appearance by Clinton and Massachusetts senator Elizabeth Warren, the popular poster-girl among dark-blue Democratic liberals – the very people Sanders electrified during his populist primary campaign.

Monday’s rally at the liberal arts college was the first time Clinton and Warren have appeared on stage together since June, when the talk was of Warren as Clinton’s running mate.

The two women presented a united front on Monday with a common enemy in Trump, hoping to gel the centrist and progressive wings of the party enough to beat the Republican nominee on election day in just under a fortnight.

“I just want to be official here: I’m with her. Are you with her?” the effervescent Warren asked the crowd in her remarks before introducing Clinton, drawing a loud cheer.

This year’s bruising Democratic primary dragged Clinton to the left, finally agreeing policies – from debt refinancing for students and tuition-free college for middle-class families to reining in Wall Street and big corporate interests – that have appeased the Sanders-Warren faction.

“It’s not about one person or one candidate,” Warren told a crowd of more than 4,000 on a sun-kissed lawn in front of the university’s main building. “It’s about a movement. It’s about a strong, powerful movement to make real change in this country, the kind of change that we make together.”

New Hampshire’s primary exposed the ideological chasm within the Democratic Party and cracks in Clinton’s own candidacy. Sanders won the first-in-the-nation primary by 22 points, transforming what was expected to be a Democratic coronation into a competitive battle. The only age group that the former secretary of state won in the state was 65 and up.

Since that primary, Clinton has made only three appearances in New Hampshire, and each has been with the party’s rock stars of the left: twice with Sanders and once now with Warren.

After remaining neutral in the primary, Warren has since become one of Clinton’s most effective Trump bashers. She delivered plenty of punches on Monday afternoon, throwing the Republican nominee’s “such a nasty woman” insult back at him by warning that “nasty women vote”.

It is a line worthy of a T-shirt and could become the anti-Trump rallying cry, the Democratic answer to the Clinton’s “basket of deplorables” gaffe that coalesced the Republican’s supporters.

“I don’t know about you, but I could listen to Elizabeth Warren go on all day,” said a beaming Clinton after taking the podium following an extravagant hug with the Massachusetts senator.

Warren’s performance will help inject excitement into New Hampshire voters, particularly younger women and students who are voting for Clinton mainly because she’s not Trump.

“Because I disagree with Trump more” was the reason St Anselm student Jenna Block (18) from Maine gave for supporting Clinton. She and her three friends, all heading to the rally, had supported Sanders in the primary and were voting for the Democratic nominee for president.

“A lot of people are worried that there’s the possibility that Trump will be the president, so they are doing anything possible to not have him as president and that would mean voting for Hillary,” said Chelsea Hall (18), also from neighbouring Maine, giving an anaemic endorsement of Clinton.

New Hampshire is a Democratic-leaning state that the party has won in the last three presidential elections, and Trump has tilted its large proportion of college-educated voters even further that way.

Clinton leads in the national polls by five points, on average, and eight points in New Hampshire (one poll last week even had her 15 points ahead), giving the Democrat an additional block to stop Trump’s path to the White House. On Monday, her poll standing gave her enough confidence to spend some time pushing the party’s full New Hampshire ticket.

That included the Granite State’s governor, Maggie Hassan, who is locked in a tight race with sitting US senator Kelly Ayotte for a seat that could prove critical in the party’s chances of wresting a narrow majority in the Senate from the Republicans.

“Unlike her opponent, she has never been afraid to stand up to Donald Trump,” Clinton said, referring to the knots Ayotte has tied herself up in trying to navigate the treacherous Sea of Trump.

A Democratic majority in the Senate would give a President Hillary Clinton strong legislative backing, and with the candidate in such a commanding lead, top liberal Democrats such as Sanders have already been talking about her cabinet posts. Clinton’s campaign team has called the speculation “entirely premature”.

It all points to the potential battles Clinton faces over the internal party divisions, stoked by the primary, should she win.

“If Clinton is elected with a Democratic majority Senate and, who knows, a Democratic-majority House, she’ll have to win over those Bernie Sanders, Elizabeth voters, who are going to demand an aggressive agenda,” said Dante Scala, a politics professor at the University of New Hampshire.

In the crowd, older Clinton supporters were hopeful that Trump would encourage younger women to embrace the Democratic nominee’s historic candidacy, as they themselves have done so enthusiastically.

“We want to make sure that she has a sure, clear win here in New Hampshire and across the United States, ” said Donna Butler (63), who drove 2½ hours to the rally from Maine.

Wearing a “TrumpBusters” T-shirt, playing on the Ghostbusters logo, Butler was confident that young people won’t support libertarian Gary Johnson in a protest vote against the two main candidates. However, two male St Anselm students wandering the campus on Monday told The Irish Times that they were either voting for Johnson or at least leaning his way.

“The more they pay attention to what that man is saying, Mr Trump, they should be turned off totally,” said Butler. “When they get in that booth, when it comes time, I think they are going to vote for Hillary.”

Some millennials were still not sure.

Alex Farrohi (18), a St Anselm student, was undecided and went to Clinton’s rally hoping the candidate could persuade her to see beyond the controversies, such as her private email scandal.

“It is a hard election,” Farrohi said. “For my first election, I am kind of concerned. I think previous ones haven’t been this difficult and there hasn’t been so much controversy. I am very confused right now.”