US president faces showdown with Democrats over appointment

Donald Trump threatened that the GOP would 'go nuclear' if the Democratic party tried to halt his Supreme court nominee. Trump also took issue with the 'demeaning' press at the press conference. Video: Reuters 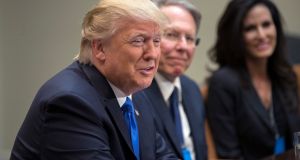 Donald Trump is threatening the biggest showdown of his nascent presidency after he urged the Senate’s Republican leader to “go nuclear” if Democrats attempt to block his supreme court nominee Neil Gorsuch.

The US president’s nomination of federal appeals court just Gorsuch, a trusted conservative, drew scorn from Democrats, who plan to fight the appointment that would tip the ideological balance of the nine-judge court to the right as it weighs contentious issues such as abortion, gun control and religious freedom.

Democrats are eager to disrupt Mr Trump’s plans in the wake of a bruising presidential campaign and his far-reaching immigration orders, bypassing Congress, banning travellers from seven Muslim nations.

Mr Trump told reporters that he would urge Republican Mitch McConnell to take the “nuclear” option by stripping Democrats, the Senate’s minority party, of the power to block Judge Gorsuch’s confirmation.

Republicans control the 100-seat Senate with 52 seats, but under an existing rule they require the support of eight Democrats to reach a 60-vote threshold to confirm the court nominee.

Mr McConnell could persuade Republicans to change the rule to confirm him with a simple 51-vote majority, but this would further contaminate the toxic political atmosphere in Washington and set a dangerous precedent, handing the Democrats the option to use the same measure in retaliation.

The US president is willing to take that risk to push through the appointment of a conservative judge to replace the late Antonin Scalia, one of the signature promises of his 2016 presidential campaign.

Democrats used the nuclear option in 2013 to confirm Mr Obama’s judicial and cabinet nominations to overcome Republican opposition, but did not change the 60-vote rule for Supreme Court nominees. Mr McConnell has refused to say whether he would lift that last barrier for presidential nominees.

The Colorado judge (49), the court’s youngest nominee in a quarter-century, is admired by conservatives for his strong stands in support of religious freedom and in opposition to gun controls and LGBT rights.

Chuck Schumer, the Democratic senate minority leader, said his party would oppose any nominee who was outside the legal mainstream and has insisted that Judge Gorsuch’s nomination secure at least 60 votes.

Mr Trump is already facing strong opposition from Democrats and even fellow Republicans to his cabinet picks. Susan Collins of Maine and Lisa Murkowski of Alaska said they would not vote for his choice for education secretary, Betsy DeVos, becoming the first Republican senators to oppose a cabinet pick.

Senate Republicans suspended congressional rules to approve the nominations of US congressman Tom Price as Mr Trump’s health secretary and former Wall Street financier Steve Mnuchin as treasury secretary, after Democrats boycotted a committee vote, to proceed with their confirmation to a full Senate vote.

In more positive developments for the Republican president, the Senate confirmed the appointment of Rex Tillerson as secretary of state, putting the lifelong Exxon Mobil oil company executive in charge of his “America First” foreign policy, while a Senate committee panel, after a fiery debate, voted to advance the nomination of Alabama senator Jeff Sessions as US attorney general to the 100-seat upper chamber of congress.