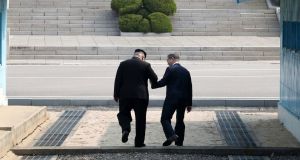 Donald Trump has claimed credit for the historic meeting between the leaders of North and South Korea and declared that peace on the divided peninsula could be achieved and its people could live in harmony.

The US president spoke hours after Kim Jong Un became the first North Korean leader to travel south of the demarcation line between the two Koreas, meeting President Moon Jae-in.

They pledged in a joint statement to seek a formal end to the Korean War by the end of the year and to rid their peninsula of nuclear weapons, without specifying how it would be achieved.

“When I began, people were saying that was an impossibility,” Mr Trump said during an appearance with US athletes who participated in this year’s Winter Olympics in South Korea.

“They said there were two alternatives: Let them have what they have, or go to war. And now we have a much better alternative than anybody thought even possible.”

The Kim-Moon meeting was the culmination of a rapprochement inspired by the February games.

Responsibility for turning a bold vision for peace into reality will in large part rest with Mr Trump, who has often vowed to succeed where his predecessors have failed in eliminating the North Korean nuclear threat to America.

After a furious year of missile launches and Nuclear testing, a historic meeting between North and South Korea is now taking place. Good things are happening, but only time will tell!

On Friday he gave an unequivocal statement that he would sit down with Mr Kim - a meeting that has been tentatively scheduled for May or early June - in what would be a first during six decades of hostility.

“I’ll be meeting with Kim Jong Un in the coming weeks as we seek to denuclearise the North Korean area and the entire Korean peninsula,” Mr Trump said.

“Hopefully the day will come when Olympic athletes can compete on a Korean peninsula that is free of nuclear weapons and where all Koreans can live together and can share their dreams. It would be a wonderful thing to do.”

Earlier, and with characteristic swagger, he had touted the outcome of Friday’s summit between Mr Kim and Mr Moon as a breakthrough in the generational stand-off.

“KOREAN WAR TO END!” he tweeted. “The United States, and all of its GREAT people, should be very proud of what is now taking place in Korea!”

In a separate tweet, he said “good things are happening, but only time will tell”.

After a febrile year, when the US and North Korean leaders traded threats while Mr Kim pushed his nation to the verge of being able to fire a nuclear-tipped missile at the US mainland, tensions have eased with Mr Kim’s sudden shift to international diplomacy.

Last month, Mr Trump surprised the world by accepting an offer to negotiate with Mr Kim, who has announced a halt to nuclear and long-range missile tests.

Mr Trump also offered credit to China, North Korea’s traditional ally and main trading partner, which has supported tough international sanctions against North Korea to pressure it to give up its nuclear arsenal.

Despite the optimistic rhetoric, major uncertainty still surrounds North Korea’s commitment to “denuclearise” and what it would demand in return.

The North has spent decades building up an atomic arsenal as a deterrent against a US invasion and as a safeguard for the continuance of its totalitarian regime. - AP