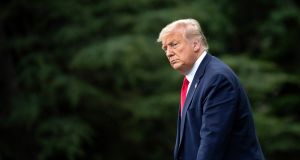 US president Donald Trump walks on the South Lawn of the White House before boarding Marine One on July 24th, 2020. Photograph: Stefani Reynolds/EPA

US president Donald Trump on Friday signed four executive orders aimed at lowering the prices Americans pay for prescription drugs, as he faces an uphill re-election battle and criticism over his handling of the coronavirus pandemic.

Mr Trump has previously proposed most of the changes made by the executive orders he signed on Friday, but this is the first time they have made it into signed executive orders.

One order would allow for the legal importation of cheaper prescription drugs from countries like Canada, while another would require discounts from drug companies now captured by middlemen to be passed on to patients, Mr Trump said.

Another measure seeks to lower insulin costs while a fourth, which may not be implemented if talks with drug companies are successful, would require Medicare to purchase drugs at the same price that other countries pay, Mr Trump said.

Executives of top drug companies have requested a meeting to discuss how they can lower drug prices, the US president said.

“We will see what those discussions indicate but the agency is prepared to move forward,” said Medicare chief Seema Verma.

The orders received swift pushback from the pharmaceutical industry. The move was “a reckless distraction that impedes our ability to respond to the current pandemic - and those we could face in the future,” Pharmaceutical Research and Manufacturers of America said in a statement.

Wall Street analysts were sceptical that the orders would have much effect on drugmakers and said they could prove difficult to implement in practice.

“We believe they are likely geared more towards deriving campaign talking points rather than producing tangible, material effects,” Brian Abrahams, a biotech analyst at RBC Capital Markets, said in a note.

Shares of several drugmakers ticked up as Mr Trump outlined the plan, recovering some of the day’s losses.

Mr Trump repeatedly has called for lowering the cost of prescription drugs but Congress has not yet passed a major drug price reform.

Many of the administration’s past efforts to cut drug prices, including its plan to force insurers and other healthcare payers to pass rebates on to patients, have stalled amid industry pushback.

“Reviving a rebate reform proposal now does not address the underlying flaws - that it will drastically increase Medicare premiums for America’s seniors and most vulnerable,” the Pharmaceutical Care Management Association, whose members negotiate rebates for healthcare payers with drugmakers, said in a statement.

Paying the rebates directly to seniors in the form of discounts could cut their drug costs by as much as $30 billion (€25.74 billion), or as much as 30 per cent, US health and human services Secretary Alex Azar said in a Friday press call.

Mr Trump is under fire for surging coronavirus cases in the United States and beset by decreasing poll numbers ahead of November 3rd elections. On Friday, he also said that the White House would propose a healthcare Bill soon but offered few details.

Drugmakers often negotiate rebates or discounts on their list prices in exchange for favourable treatment from insurers. As a result, insurers and covered patients rarely pay the full list price of a drug.-Reuters