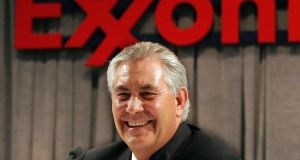 Rex W. Tillerson who is expected to be named US secretary of state. File photograph: EPA

US President-elect Donald Trump is expected to name the chief executive of Exxon Mobil as the country’s top diplomat, a source familiar with the situation said on Saturday, an appointment that would put in place an official with close ties to the Russian government.

Exxon chief Rex Tillerson emerged on Friday as Trump’s leading candidate for US secretary of state over 2012 Republican presidential nominee Mitt Romney and three other people.

Mr Tillerson met Mr Trump for more than two hours at Trump Tower on Saturday morning. It was their second meeting about the position this week.

The source, who spoke on condition of anonymity, said Mr Tillerson was the expected pick but cautioned no formal offer had yet been made.

Trump spokesman Jason Miller said no announcement on the high-profile job was forthcoming in the immediate future.

“Transition Update: No announcements on Secretary of State until next week at the earliest. #MakeAmericaGreatAgain,” he tweeted.

Trump took a break from his deliberations over who to pick for the secretary of state job and other positions by attending the Army-Navy football game in Baltimore.

He was joined by former New York Mayor Rudy Giuliani, who withdrew from consideration as secretary of state on Friday.

NBC News, which first reported the development, said Mr Trump would also name John Bolton, a former US ambassador to the United Nations, as deputy secretary of state.

As Exxon’s CEO, Mr Tillerson oversees operations in more than 50 countries, including Russia. In 2011, Exxon Mobil signed a deal with Rosneft, Russia’s largest state-owned oil company, for joint oil exploration and production. Since then, the companies have formed 10 joint ventures for projects in Russia.

Mr Trump has pledged to work for stronger US ties with Russia, which have been strained by Russian President Vladimir Putin’s seizure of the Crimea section of Ukraine and his support for Syrian President Bashir al-Assad.

In a preview from an interview to be aired on “Fox News Sunday,” Mr Trump said Mr Tillerson is “much more than a business executive.”

“I mean, he’s a world class player,” Mr Trump said. “He’s in charge of an oil company that’s pretty much double the size of his next nearest competitor. It’s been a company that has been unbelievably managed.”

“And to me, a great advantage is he knows many of the players, and he knows them well. He does massive deals in Russia,” Mr Trump said.

Mr Tillerson’s Russian ties figure to be a factor in any Senate confirmation hearing.

Senate Armed Services Committee Chairman John McCain, a long-time Putin critic, told Fox News that he does not know what Mr Tillerson’s relationship with Mr Putin has been, “but I’ll tell you, it is a matter of concern to me.”