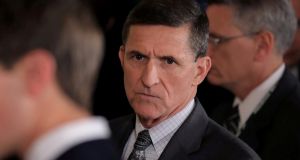 Lawyers for Michael Flynn, President Donald Trump’s former national security adviser, have told Trump’s legal team they can no longer discuss a probe into Russian meddling in the US election, indicating Flynn may be co-operating with the investigation, the New York Times reported on Thursday.

Flynn is a central figure in a federal investigation led by special counsel Robert Mueller into whether Trump aides colluded with Russia to boost his 2016 presidential campaign. The probe has hung over the White House since January, when US intelligence agencies concluded that Russia interfered in the election to try to help Trump defeat Democrat Hillary Clinton by hacking and releasing embarrassing emails and disseminating propaganda via social media to discredit her. Russia has denied interfering in the US election and Trump has said there was no collusion.

Flynn’s lawyer did not immediately respond to a Reuters request for comment on Thursday, the US Thanksgiving holiday. A spokesman for Mueller declined comment. Special White House counsel Ty Cobb referred questions to Trump’s outside lawyers John Dowd and Jay Sekulow, who could not be reached for comment. The Times reported that Flynn’s lawyers had been sharing information with Trump’s legal team about the Mueller investigation. Citing four unnamed people involved in the case, the newspaper reported the co-operation agreement had ended. Due to rules that aim to prevent conflicts of interest when lawyers represent clients, the move by Flynn’s lawyers to stop communicating with Trump’s lawyers indicated Flynn was now co-operating with Mueller, the Times said, although adding that in itself was not proof. But the development has led Trump’s lawyers to believe that Flynn has begun discussions with Mueller about co-operating, according to the Times.

Flynn served 24 days as Trump’s national security adviser but was fired after it was discovered he had misrepresented his contacts with a Russian diplomat to vice president Mike Pence. Mueller’s inquiry is looking into Flynn’s paid work as a lobbyist for a Turkish businessman in 2016, in addition to contacts between Russian officials and Flynn and other Trump associates during and after the presidential election, Reuters reported in June. A lawyer for Flynn’s son, Michael Flynn Jr, who worked with his father and is also being investigated by Mueller, according to a person familiar with the matter, declined to comment.