Amid gun control pressure, US president also spoke of building a wall and Hillary Clinton

US president Donald Trump returned to his campaign style speech at the CPAC conference, referencing the border wall, 'crooked Hillary' and his bald spot. Video: The White House 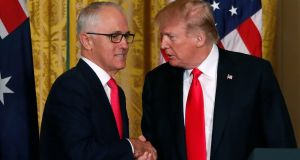 US president Donald Trump attempted to woo his Republican support base at a conservative conference in Maryland on Friday, as his administration tried to walk a fine line on gun control amid continuing outrage over last week’s Florida school shooting.

In an 80-minute speech at the Conservative Political Action Conference (CPac), Mr Trump returned to some of the incendiary themes that characterised many of his campaign rallies, lashing out at Democrats including Nancy Pelosi and Hillary Clinton, prompting cheers from the audience.

He also pledged to build the border wall and claimed to have had “the most successful first year in the history of the presidency”.

Speaking a day after the head of the National Rifle Association (NRA) defended gun rights at the conference, the US president reiterated his call for teachers to be armed.

“When we declare our schools to be gun-free zones, it just puts our students in far more danger,” he said to applause, reiterating his belief that those who are “adept” at weaponry, such as retired marines or members of the army, should be given weapons in the classroom.

Earlier, he strongly condemned Scot Peterson, the armed guard who was present at the Marjory Stoneman Douglas High School in Parkland during the school shooting, but stayed outside the school as the rampage unfolded.

“When it came time to get in there and do something, he didn’t have the courage, or something happened, but he certainly did a poor job. There’s no question about that,” the president told reporters on the way to the Cpac conference.

Mr Peterson, who resigned on Thursday, is under investigation after video footage showed that he remained outside while the suspect shot dead 17 people during the gun attack on February 14th.

“What I saw was a deputy arrive . . . take up a position and he never went in,” Broward County Sheriff Scott Israel said at a news conference on Thursday as he updated media on the investigation. “There are no words. I mean these families lost their children. We lost coaches.”

Speaking alongside Australian prime minister Malcolm Turnball at a press conference later on Friday, Mr Trump pledged again to bring forward measures on gun control, including banning “bump stocks” – devices attached to guns to simulate automatic fire. But he appeared to row back from previous suggestions that the minimum age for buying certain weapons should be raised to 21 – something the NRA has opposed.

Asked about Australia’s own success in stopping gun crime, after gun ownership laws were severely tightened in the wake of a 1996 mass shooting, Mr Turnball said that Australia was “very satisfied” with its laws.

But he stopped short of drawing parallels with America. “We certainly don’t presume to provide a policy or political advice on that matter here. You have an amendment to your constitution which deals with gun ownership, you have a very, very different history. We will focus on our own political arguments and debates and wish you wise deliberation.”