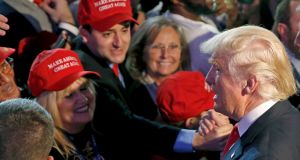 The crowd at Donald Trump’s rally in New York had waited for seven hours, shifting from quiet resignation early in the evening to unbridled joy as night turned to morning.

Now, just before 3am, news of Trump’s arrival spread through the jubilant crowd. They roared and yelled with all the strength they could muster after the long night.

The room was a sea of bobbing red caps, each one bearing the slogan of the campaign, ‘Make America Great Again.’ “USA! USA!” came the chant.

Friends hugged. Couples danced. Some were in tears.

All that remained was for Fox News, broadcast live on more than 15 big screens around the venue, to declare Trump the winner and confirm one of the biggest political shocks of the postwar era.

“The unthinkable has happened,” said the anchor. With that, pandemonium.

Trump was waiting in the wings. Suddenly he appeared on a balcony overlooking the ballroom and, accompanied by his family and the ‘Air Force One’ theme song, he ascended the stairs and took in the acclaim.

A decorative red ‘Make America Great Again’ cap stood mysteriously in a protective glass box next to the podium.

“Sorry to keep you waiting,” he began breezily. “Complicated business.”

Trump confirmed that Hillary Clinton had called to congratulate him in victory. He in turn congratulated her on a hard-fought campaign and told his supporters they owed her “a major debt of gratitude for her service to our country.”

That got a smattering of half-hearted applause; just two days ago Trump called Clinton a criminal and corrupt, and just half an hour earlier, when an old video of Clinton had appeared on screen, it was greeted with a chorus of “Lock her up”, a staple of the Trump campaign repertoire.

Trump rattled through his speech. He seemed slightly nervous. The call for unity may be an obligatory staple of every victor’s speech, but most campaigns don’t descend to the nasty, divisive depths of this one.

“Now is the time for America to bind the wounds of division,” Trump said.

To “all Republicans and Democrats and independents across this nation, I say: it is time for us to come together as one united people.”

He would be a president for all Americans. “For those who have chosen not to support me in the past, of which there were a few people, I’m reaching out to you for your guidance and your help so that we can work together and unify our great country.”

His was a movement comprised of “Americans from all races, religions, backgrounds and beliefs”, he said, united by a desire for government to serve the people. “And serve the people it will.”

Reprising some of the themes of his campaign, he pledged to “fix” America’s inner cities, rebuild its highways and bridges and put millions to work in the process. He would look after veterans and embark on a programme of “national growth and renewal”.

To the rest of the world, he sought to offer some reassurance.

“I want to tell the world community that while we will always put America’s interests first, we will deal fairly with everyone. All people and all other nations. We will seek common ground, not hostility; partnership, not conflict.”

The audience drank in every word, applauding and cheering to fill the pauses. “It’s very exciting,” said Susan Esson, a supporter from Palm Beach, Florida. “Trump had to win for America to be great again. I know that’s a cliché, but it had to happen. Hillary is so corrupt. They have got to just clean house.”

Like many others in the crowd, Esson was happy to admit that she came along more out of hope than expectation of a Trump victory.

“I prayed. I did a million rosaries. And now this is a chance to show what we’re all about.”

For 84-year-old Patrick Egan, a retired insurance worker with Irish roots, the result confirmed a hunch he had for weeks.

“These people were blue-collar workers, and they’re very quiet. They did the same thing for Reagan. I said ‘they’re going to go out and pull the lever for him.’ And I think that’s what happened today.”

Earlier in the evening, an air of defeat had hung over the Hilton ballroom. Initial exit poll findings released at 7pm had suggested Trump was in for a difficult night: a majority of voters said he had neither the experience nor the temperament to be president, and it appeared turnout was exceptionally high among Hispanics, whose votes would favour Clinton.

The Trump camp appeared to be preparing the ground for a defeat, paying tribute to the property magnate’s campaign and, in the case of campaign manager Kellyanne Conway, criticising senior Republicans for failing to show sufficient support.

But within a few hours, as Trump stretched his lead in Florida, followed by vital wins in Ohio and North Carolina, the mood was transformed.

By the time Fox News called Wisconsin for Trump at 11.30pm – confirming that he had breached the “blue firewall” that Clinton had banked on in the upper Midwest, the celebrations began.

In his view Trump had filled a need, reminding Americans that they had lost sight of “what really matters to us.”

“People see him as sort of an anti-progress guy. I don’t see him like that. I see him very much as forward-thinking,” said Higgins.

“What bothers a lot of the policy wonks is that he doesn’t have the answers. But the American political philosophy is that we can evolve and change over time, and I think he recognises that.

“I see him as a far more astute political person than most of professional politicians.”

After a campaign marked by pessimism and anger, Trump attempted to shift course in closing his first speech as president-elect.

“We must reclaim our country’s destiny and dream big and bold and daring,” he said.

“We’re going to dream of things for our country – beautiful things, successful things once again.”

By now the crowd was already spilling out onto the streets of Manhattan. His remarks delivered, Trump and his family left the stage to a song by the Rolling Stones.

“You can’t always get what you want,” the sound system blared as Trump made for the door.