Trump to meet Erdogan, as impeachment hearings to be televised 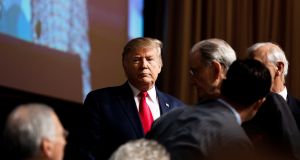 Turkish president Recep Tayyip Erdogan will meet US president Donald Trump in the White House on Wednesday, in the first face-to-face meeting between the two men since Turkey’s incursion into northern Syria last month.

The meeting will take place as the first public hearings in the impeachment inquiry take place on Capitol Hill, ushering in a new phase in the investigation.

The prospect of a split-screen day in Washington comes as Mr Trump faces continued criticism from senior congressional Republicans for his decision to abandon US-Kurdish allies in northern Syria last month, paving the way for Turkey to invade.

The decision was taken following a phone call between the US and Turkish leaders.

Relations between Washington and Ankara are delicate. The House of Representatives recently passed a sanctions package to punish Turkey for its Syrian invasion, and several lawmakers wrote to Mr Trump on Monday, urging him to rescind the invitation to Mr Erdogan. The White House has also warned Ankara that it could face action over its decision to buy S-400 missile defence systems from Russia.

For its part, Turkey is bristling from last week’s vote in the House of Representatives to recognise the Armenian genocide, a categorization of the early 20th-century atrocity that is flatly rejected by Ankara.

Speaking in New York on Tuesday, Mr Trump said that the US knows the location of the third in command to Islamic State leader Abu Bakr al-Baghdadi, who was killed last month in a US-led raid.

A total Impeachment Scam by the Do Nothing Democrats! https://t.co/aFTQe293JF

“We have our eye on his third,” Mr Trump said, responding to questions after his speech at the Economic Club of New York. “His third has got a lot of problems because we know where he is too.”

Since its decision to withdraw its troops from Syria last month, the US has modified its stance somewhat, leaving a small number of troops in the area. The Turkish leader subsequently agreed a peace plan with Russia, which has an interest in the region.

As Mr Erdogan and Mr Trump meet in the Oval Office on Wednesday, lawmakers in the US Capitol will be questioning two witnesses on the first day of public hearings in the impeachment trial.

The impeachment inquiry was opened by House Speaker Nancy Pelosi last month, following the revelation of details about a July 25th phone call between Mr Trump and Ukrainian president Volodymyr Zelenskiy during which the US president asked his counterpart to investigate former vice-president Joe Biden and his son Hunter who served on a Ukrainian energy company.

The televised hearings will be the first time witnesses will testify publicly.

Tweeting on the eve of the hearings, Mr Trump wrote: “A total Impeachment Scam by the Do Nothing Democrats!”

The prospect of acting White House chief of staff Mick Mulvaney appearing as a witness receded, however, after he said he would obey White House orders not to testify.

Mr Mulvaney surprised many by seeking to join a lawsuit brought by long-time John Bolton aide Charles Kupperman, seeking guidance as to whether he should obey Congressional requests for him to testify, or follow White House orders not to co-operate.

He withdrew his efforts after lawyers for Mr Kupperman objected.

Mr Bolton is said to be taking the same position as Mr Kupperman in waiting for the court to decide whether he should testify.

Mr Mulvaney on Tuesday said in a court filing that he was no longer pursuing litigation.