US president spoke from White House balcony to a crowd below chanting ‘USA, USA’ 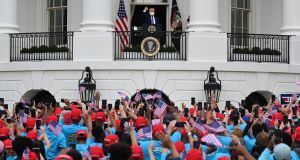 US president Donald Trump gestures while arriving to speak from the Truman Balcony of the White House in Washington, DC on Saturday. Photograph: Erin Scott/Bloomberg

US president Donald Trump held a campaign-rally style event at the White House on Saturday, in his first public appearance since his release from hospital following his coronavirus diagnosis.

The event immediately prompted accusations that Mr Trump was using the office of the presidency to promote his own re-election campaign, while also potentially putting the lives of hundreds of people in danger given his recent Covid-19 diagnosis.

Arriving to shouts of “USA, USA” as he appeared on the balcony of the White House to the tune of Hail to the Chief, Mr Trump attacked his presidential rival Joe Biden and the Democratic party.

“We cannot allow our country to become a socialist country,” he said to cheers, warning that Democrats would open “your border to mass immigration”.

“If the left gains power, they will launch a nationwide crusade against law enforcement – taking away their funds, their firearms, and their fundamental authorities,” he said. “It is time for all Americans to stand up and reject the campaign of slander against our police.”

Mr Trump was addressing a group of supporters who were attending a separate Back the Blue event in Washington DC, designed to outline support for law enforcement officers.

Most of those in the crowd were wearing distinctive Back the Blue t-shirts and red Make America Great Again hats. During the speech they periodically broke into shouts of “We Love You” and “Four More Years.”

While some were wearing masks, social distancing was not observed, as the supporters gathered on the South Lawn of the White House. Trump administration officials insisted that the event was not in breach of the Hatch Act which prohibits federal employees from engaging in political activity because no Trump re-election campaign staff were involved in the event.

Declaring that next month’s election is “the single most important election in the history of our country,” Mr Trump told the crowd: “we have a level of support the likes of which no one has ever seen.”

Mr Trump’s upbeat assessment of his re-election chances came as several polls show his opponent Joe Biden opening up a double-digit lead over the president nationally.

Mr Trump also renewed his criticism of the absentee ballot system, amid signs that a great number of Americans plan to vote by mail this year because of the Covid-19 pandemic.

“Have you seen how many crooked ballot . . . fraudulent ballots?,” he said, claiming that there were “tremendous problems with the ballots. Every day there’s a story about the ballots.”

But he added: “I think we’re going to swamp them by so much it’s not going to matter.”

Bottom of the scale

Mr Trump’s first public appearance since returning from the White House from the Walter Reed Medical Centre last Monday, comes ahead of his planned return to the campaign trail on Monday when he is due to hold a rally in Florida.

The president also gave his first TV interview on Friday evening to Fox News where he told the network’s medical expert Dr Mark Siegel that he was no longer taking medications for Covid.

“I’m either at the bottom of the scale or free,” he said of the coronavirus. While the pre-recorded segment had been billed as a “medical evaluation” of the president by the right-wing network, it was largely a traditional interview, though Mr Siegel did ask a series of questions of the president. However, he did not ask when Mr Trump had last tested negative – a key indicator of whether the president may still be infectious.

Meanwhile, it was announced on Saturday that the second presidential debate between Mr Trump and Mr Biden which had been due to take place in Miami will not go ahead.

The Commission on Presidential Debates – the independent body that runs debates – said it was cancelling the one-on-one over safety concerns. Mr Trump declined to participate in a virtual debate as had been proposed by the commission on Thursday, accusing the body of “trying to protect Biden”. Mr Biden will instead take part in a televised ABC townhall event on Thursday his campaign said.

1 Ireland could lose out as France lays claim to most of €5bn Brexit compensation fund
2 Miriam Lord: The Dáil's answer to John Wayne overcooks the ham slice, by slice, by slice
3 Q&A: What restrictions are going to be lifted next week?
4 Publican blames Covid-19 as Dublin’s Dice Bar to shut for good
5 Fine Gael’s rising star Helen McEntee faces most serious crisis of her career
Real news has value SUBSCRIBE