Trump has declared war on First Amendment with media ban

Members of Congress must defend our democracy from this extraordinary threat 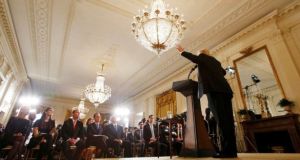 In barring news outlets like the New York Times, CNN and the Guardian from a White House press briefing on Friday, the president has declared war on the First Amendment.

Those who said the presidency would change Donald Trump were correct. It has made him worse.

In barring news outlets like the New York Times, CNN and the Guardian from a White House press briefing on Friday, the president has declared war on the First Amendment.

In doing so he has attacked a cornerstone of democratic self-governance.

New York Times editor Dean Baquet said: “Nothing like this has ever happened at the White House in our long history of covering multiple administrations of different parties.”

CNN, which the president has often labelled ‘fake news’, responded by saying: “Apparently this is how they retaliate when you report facts they don’t like.”

Buzzfeed’s editor echoed that point, saying this was an “apparent attempt to punish news outlets.”

On the same day that access was being denied to journalists at the White House, Trump was at CPAC continuing his ferocious attacks on the media:

“I want you all to know that we are fighting the fake news,” said Trump.

“They have a professional obligation as members of the press to report honestly.

“But as you saw throughout the entire campaign, and even now, the fake news doesn’t tell the truth.”

At the conference, Trump dismissed concerns about press freedoms.

“They always bring up the First Amendment,” he said.

The escalation has been swift but not unplanned.

The opening salvo was chief strategist Steve Bannon’s labelling the press the opposition and telling it “to keep its mouth shut.”

Then came Trump’s tweet defaming the press as the “enemy of the people.”

And now comes this – denying some of the world’s most revered news organisations access to the White House.

These must be seen for what they are: the strong-arm tactics of an authoritarian.

It is, in fact, a signature of authoritarian rulers that they turn the opposition into the enemy.

The opposition is to be engaged and persuaded; the enemy is to be isolated and crushed.

The turning of the opposition into the enemy is often a prelude toward the final step of authoritarian consolidation: turning enemies into criminals.

Do any of us dare to believe that Bannon, the system-destroyer, would shy away from this?

And need we ask who is the real enemy of our constitutional democracy?

This radical attack cannot go unanswered. The pushback must come from all corners – in particular from congressional Republicans.

We cannot rely on John McCain, Lindsay Graham, and Cory Gardner to be the lone voices of concern.

Opposing the president not only puts their agenda at risk but their political careers in jeopardy.

Paul Ryan learned the hard way of the perils of crossing Trump, when he saw his approval ratings plummet after refusing to campaign on Trump’s behalf in the latter stages of the national election.

The hazards of opposition are real – on all sides.

But members of Congress swear to uphold the Constitution, and this oath of public service requires defending our democracy from this extraordinary threat.