‘He always had guns on him’: Students describe main suspect after 17 killed in attack

Students at Marjory Stoneman Douglas High School in Parkland, Florida, share their experiences of a deadly shooting by a former student. Video: Reuters 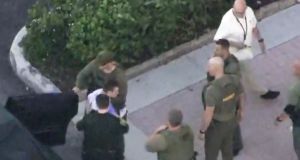 Police escort a suspect into the Broward Jail after checking him at the hospital following a shooting incident at Marjory Stoneman Douglas High School in Parkland, Florida, on Wednesday. Photograph: Reuters

The teenager who allegedly opened fire inside a Florida high school Wednesday, killing at least 17 people, was a former student who had been expelled for disciplinary reasons, the authorities said.

Sheriff Scott Israel of Broward County, Florida, said that the man, Nikolas Cruz (19) previously attended Marjory Stoneman Douglas High School in Parkland but was expelled after getting into trouble. He was enrolled at another Broward County school, officials said.

In the hours after the shooting, people who knew Mr Cruz described him as a “troubled kid” who enjoyed showing off his firearms and bragging about killing animals, and whose mother would resort to calling the police to have them come to their home to try to talk some sense into him.

At a school with about 3,000 students, Mr Cruz stayed to himself and had few friends but struck fear in some students with erratic behaviour and an affinity for violence.

“He always had guns on him,” a student at the school, who did not give his name, told WFOR-TV. “The crazy stuff that he did was not right for school, and he got kicked out of school multiple times for that kind of stuff.”

Authorities offered no immediate details about Mr Cruz or his possible motive, except to say that he had been kicked out of the high school.

Mr Cruz’s mother Lynda Cruz died of pneumonia on November 1st, neighbours, friends and family members said, according to the Sun Sentinel. Ms Cruz and her husband, who died of a heart attack several years ago, adopted Nikolas and his biological brother, Zachary, after the couple moved from Long Island in New York to Broward County.

The boys were left in the care of a family friend after their mother died, family member Barbara Kumbatovich, of Long Island, said.

Unhappy there, Mr Cruz asked to move in with a friend’s family in northwest Broward. The family agreed and he moved in around Thanksgiving. According to the family’s lawyer, who did not identify them, they knew that Mr Cruz owned the AR-15 but made him keep it locked up in a cabinet. He did have the key, however.

Victoria Olvera, a 17-year-old junior at the school, said Mr Cruz was expelled last school year because he got into a fight with his ex-girlfriend’s new boyfriend. She said he had been abusive to his girlfriend.

Jim Gard, a math teacher at Stoneman Douglas, said in an interview that Mr Cruz was a student in his class during the first semester of the 2016-17 school year.

In the class, he was quiet and not disruptive, Mr Gard said. But he recalled that school administrators became concerned last year about Mr Cruz’s behaviour and alerted the faculty. “We received emails about him from the administration,” Mr Gard said in an interview, adding that he did not recall the specific issues.

After the shooting on Wednesday, Mr Gard said several students told him that Mr Cruz was taken with a girl at Stoneman Douglas “to the point of stalking her.”

Brandon Minoff, a student at Stoneman Douglas, said in an interview with CNN that a teacher assigned him to work with Mr Cruz on a group project two years ago. Mr Cruz was quiet in class but opened up during their project, Mr Minoff said, telling him that he had been kicked out of two private schools, had been held back twice and aspired to join the military.

“He was always to himself and never tried to associate himself with anyone,” Mr Minoff said. “As far as I know, he didn’t have any friends.”

School officials declined to say why Mr Cruz no longer attended Stoneman Douglas. But Amanda Samaroo, whose daughter, Elizabeth, attended the school while he was a student there, said he had been expelled for bringing knives on campus. “Her friends have said he was known to always be mentally ill and would kill animals,” Ms Samaroo said.

Helen Pasciolla, who is retired, lives on an elegant street in the Pine Tree Estates development in Parkland, three houses down and across from where the Cruz family resided until about a year ago. Ms Pasciolla said Mr Cruz told her that the family had to move out of their one-story beige house and sell it because they could no longer afford it.

Ms Pasciolla said that the boys’ mother had regular problems with their behaviour. On occasion, she said, the mother would resort to calling the police to have them come over to try to talk some sense into her sons.

“I think she wanted to scare them a little bit,” Ms Pasciolla said. “Nikolas has behavioural problems, I think, but I never thought he would be violent.”

When she saw his picture on TV on Wednesday after the shooting, Ms Pasciolla said she thought to herself: “Oh, my God, that’s the kid who lived down the street.”

Screen shots of an Instagram page said to belong to Mr Cruz show many photos of a man holding firearms and ammunition used in a semi-automatic AR-15 rifle. One photo shows several guns, including rifles with scopes, laying on a bed. Another appears to show a frog that had been killed.

After Mr Cruz left Stoneman Douglas, he took a job at a Dollar Tree store about a mile and a half from the school. A person who answered the phone at the store Wednesday evening said that Mr Cruz worked as a cashier and was well liked by his colleagues.

“He was a great guy,” the person said. He said he last saw Mr Cruz about a year ago before he transferred to another Dollar Tree store closer to his home. Another student at Stoneman Douglas, Ocean Parodie, told the Daily Beast that he visited the store after Mr Cruz was expelled to check on him.

“He said he was expelled and was happy that he was thrown out,” Mr Parodie said. “I felt bad for him.” –New York Times/PA