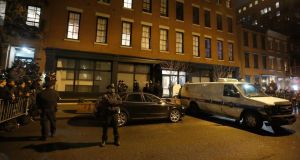 The New York City Medical Examiners van backs up to the Pickwick House where the body of actor Philip Seymour Hoffman was discovered in his West Village ApartmentPhotograph: Jemal Countess/Getty Images

Hollywood stars have paid tribute to Oscar-winning actor Philip Seymour Hoffman, who was found dead in his apartment with what officials said was a needle in his arm.

The 46-year-old actor apparently died of a drug overdose, police said, and envelopes containing what was believed to be heroin were found with him.

Hoffman — with his lumpy, heavy-set build, dishevelled look and limp, receding blond hair — was a character actor who could play comic or dramatic, loathsome or sympathetic, trembling or diabolical, dissipated or tightly controlled, slovenly or immaculate.

The stage-trained actor’s rumpled naturalism brought him four Academy Award nominations — for Capote, The Master, Doubt and Charlie Wilson’s War — and three Tony nominations for his work on Broadway, including Death Of A Salesman.

He was as productive as he was acclaimed, often appearing in at least two or three films a year while managing a busy life in the theatre.

Hoffman spoke candidly over the years about his past struggles with drug addiction. After 23 years sober, he admitted in interviews last year to falling off the wagon and developing a heroin problem that led to a stint in rehab.

“No words for this. He was too great and we’re too shattered,” said Mike Nichols, who directed Hoffman in Charlie Wilson’s War and Death Of A Salesman.

Hoffman’s body was discovered in a bathroom at his Greenwich Village apartment by his assistant and a friend who made the emergency services call.

Last night, a black body bag was carried out on a stretcher, loaded into the back of a coroner’s van and driven away.

Hoffman’s family called the news “tragic and sudden”. He is survived by his partner of 15 years, Mimi O’Donnell, and their three children.

“We are devastated by the loss of our beloved Phil and appreciate the outpouring of love and support we have received from everyone,” the family said in a statement.

Tributes poured in from other Hollywood figures.

“Damn, We Lost Another Great Artist,” Spike Lee, who directed him in 25th Hour, said on Twitter.

Kevin Costner said: “Philip was a very important actor and really takes his place among the real great actors. It’s a shame. Who knows what he would have been able to do? But we’re left with the legacy of the work he’s done and it all speaks for itself.”

He played comic, slightly off-kilter characters in movies like Along Came Polly, The Big Lebowski and Almost Famous. And in Moneyball, he was Art Howe, the grumpy manager of the Oakland Athletics who resisted new thinking about baseball talent.

He was nominated for the 2013 Academy Award for best supporting actor for his role in The Master as the charismatic, controlling leader of a religious movement. The film, inspired in part by the life of Scientology founder L Ron Hubbard, reunited the actor with Anderson.

Many younger moviegoers know him as Plutarch Heavensbee in The Hunger Games: Catching Fire, and he was reprising that role in the two-part sequel, The Hunger Games: Mockingjay, for which his work was mostly completed.

Lionsgate, which distributes the adaptations of Suzanne Collins’ multimillion-selling novels, called his death a tragedy and praised him as a “singular talent”. The last two Hunger Games movies will be released this November and in November 2015.

Only weeks ago, Showtime announced Hoffman would star in Happyish, a new comedy series about a middle-aged man’s pursuit of happiness.

Born in Fairport, New York, Hoffman was an athletic boy, but a neck injury suffered while wrestling ended any hopes of a sports career. He soon became interested in acting, mesmerised at 12 by a local production of Arthur Miller’s All My Sons.

He studied theatre as a teenager with the New York State Summer School of the Arts and the Circle in the Square Theatre. He then majored in drama at New York University.

On Broadway, he took on ambitious parts like Willy Loman in Death Of A Salesman, Jamie in Long Day’s Journey Into Night (his parents were played by Brian Dennehy and Vanessa Redgrave) and both leads in True West. All three performances were Tony nominated.

His 2012 work in Death Of A Salesman was praised as “heartbreaking” by theatre critic Mark Kennedy.

Last year, he crossed to the other side of the footlights to direct Bob Glaudini’s A Family For All Occasions for the Labyrinth Theatre Company, where he formerly served as co-artistic director. Hoffman also directed Jesus Hopped the A Train and Our Lady of 121st Street for the company and received Drama Desk Award nominations for both productions.

His other notable off-Broadway roles include Iago in Shakespeare’s Othello in 2009, Konstantin in The Seagull, directed by Nichols in 2001, and a Drama Desk-nominated part in Glaudini’s Jack Goes Boating in 2007.