Timeline: Terror in The US 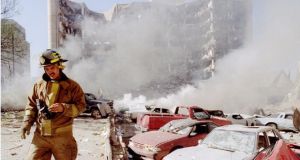 A fireman runs through the rubble of the Alfred P. Murrah federal building April, 1995, after the explosion destroyed the federal building, killing 168 people. Timothy McVeigh was convicted of the bombing. Photograph: Reuters

February 26th, 1993
A bomb in a van explodes in the underground World Trade Center garage in New York, killing six people and injuring more than 1,000.

Five Muslims are eventually convicted, including Ramzi Yousef, a British-educated Pakistani born in 1967. Apart from the first WTC bombing, Yousef was also involved in the so-called Bojinka Plot which involved a planned assassination of Pope John Paul II, the bombing of 11 airliners flying from Asia to the United States, and a proposal to crash a plane into the CIA’s headquarters in Fairfax County, Virginia.

Tried for this in New York, Yousef declared: “Yes, I am a terrorist, and proud of it as long as it is against the US government and against Israel, because you are more than terrorists; you are the one who invented terrorism and using it every day. You are butchers, liars and hypocrites.”

April 19, 1995: A car bomb parked outside the Murrah Federal Building in Oklahoma City kills 168 people and injures more than 500. It is the deadliest US bombing in 75 years. Timothy McVeigh and Terry Nichols are convicted. McVeigh is executed in 2001 and Nichols is sentenced to life in prison.

McVeigh’s motive was purely political; he believed the US government was no better than its enemies. In a 1,200-word essay written in 1998 while in jail, he asserted:

“The administration has said that Iraq has no right to stockpile chemical or biological weapons (‘weapons of mass destruction’) – mainly because they have used them in the past.

“Well, if that’s the standard by which these matters are decided, then the US is the nation that set the precedent. The US has stockpiled these same weapons (and more) for over 40 years. The U.S. claims this was done for deterrent purposes during its ‘Cold War’ with the Soviet Union. Why, then, it is invalid for Iraq to claim the same reason (deterrence) with respect to Iraq’s (real) war with, and the continued threat of, its neighbor Iran?

“The administration claims that Iraq has used these weapons in the past. We’ve all seen the pictures that show a Kurdish woman and child frozen in death from the use of chemical weapons. But, have you ever seen those pictures juxtaposed next to pictures from Hiroshima or Nagasaki?”


July 27, 1996: A bomb explodes at Centennial Olympic Park in Atlanta during the Summer Games, killing two people and injuring more than 100. Eric Robert Rudolph, an apparently religiously motivated anti-gay rights, anti-abortion activist, was arrested in 2003, pleaded guilty in 2005 and got life imprisonment without parole.

“The plan was to force the cancellation of the Games, or at least create a state of insecurity to empty the streets around the venues and thereby eat into the vast amounts of money invested.”

January 20, 1998: A bombing at an abortion clinic in Birmingham, Alabama, kills one guard and injures a nurse. Atlanta bomber Eric Robert Rudolph is suspected in the case.

January 22, 1998:Theodore Kaczynski pleads guilty in Sacramento, California to being the Unabomber in return for a sentence of life in prison without parole. He’s locked up in the federal Supermax prison in Colorado for killing three people and injuring 23 during a nationwide bombing spree between 1978 and 1995.

In a rambling manifesto, entitled Industrial Society and Its Future, Kaczynski argued that his bombings were extreme but necessary to attract attention to what he maintained was the erosion of human freedom necessitated by modern technologies requiring large-scale organisation.
September 11, 2001: Four commercial jets are hijacked by 19 al-Qaeda militants and used as suicide bombs, bringing down the two towers of New York City’s World Trade Center and crashing into the Pentagon. Nearly 3,000 people are killed in New York, Washington and Pennsylvania. Claimed motivation: US policy in the Middle East.

December 25, 2009: The so-called underwear bomber, Nigerian Umar Farouk Abdulmutallab, is subdued by passengers and crew after trying to blow up an airliner heading from Paris to Detroit using explosives hidden in his undergarments. He’s sentenced to life in prison.

May 1, 2010: Pakistani immigrant Faisal Shahzad leaves an explosives-laden SUV in New York’s Times Square, hoping to detonate it on a busy night. Street vendors spot smoke coming from the vehicle and the bomb is disabled. Shahzad is arrested as he tries to leave the country and is sentenced to life in prison.

January 17, 2011: A backpack bomb is placed along a Martin Luther King Day parade route in Spokane, Washington, meant to kill and injure participants in a civil rights march, but is found and disabled before it can explode. White supremacist Kevin Harpham is convicted and sentenced to 32 years in federal prison.

April 15, 2013: Two bombs explode in the packed streets near the finish line of the Boston Marathon, killing three people and injuring more than 130. As yet, the perpetrator’s motivation is unknown.