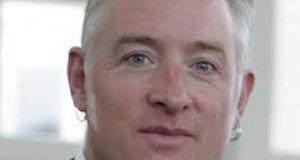 Tommy O’Malley, a Wexford-born novelist and associate professor of English at Dartmouth College in New Hampshire.

Irish-American immigrant Tommy O’Malley has condemned plans by Republican presidential candidate Ted Cruz to hunt down and deport his hypothetical namesake “Tommy O’Malley” and other “undocumented” immigrants living in the US.

The Co Wexford native, who emigrated to the US in 1984, accused the Texas senator of being “manipulative” and “deceitful,” calling him “a demagogue who is appealing to the fears and anxieties of voters”.

Mr Cruz said in an interview with Fox News commentator Bill O’Reilly on Monday that, as president, he would send federal agents to the home of fictional immigrant “Tommy O’Malley from Co Cork” who had overstayed his visa and settled in New York, and deport him.

His remarks represented a hardening of his stance on immigration policy as he battles businessman Donald Trump and his populist anti-immigration rhetoric that has made him the Republican front-runner.

The real-life Mr O’Malley, who lived illegally in the US for a brief period in the 1980s, became a US citizen two years ago.

He said he had received many teasing comments from friends since The O’Reilly Factor interview with Mr Cruz, a Canadian-born son of a Cuban immigrant father and American mother of Irish and Italian descent.

Mr O’Malley, however, pointed to the seriousness of Mr Cruz’s remarks and their failure to address the reality of immigrants in America.

“If his declaration wasn’t so sad, so unrepentant in its lack of humanity, its deceit, false criminalisation of immigrants, you’d have to laugh,” he said.

He applauded Mr O’Reilly for questioning Mr Cruz’s policy by suggesting the plight of “Tommy O’Malley” and “a scenario where a more acceptable type of undocumented immigrant – white and Irish – is brought into a discussion that until now has focused primarily on immigrants of colour.”

The Fox commentator’s attempt at enlarging the universal perspective, including Mr Cruz’s, by placing the debate in some manner of recognisable context highlighted a policy that was “fundamentally wrong” and “shaped around particular prejudices towards race.”

Mr O’Malley said that Mr O’Reilly made “Tommy O’Malley from Cork” the “poster child of white undocumented immigrants” but he believed Mr Cruz’s policy was directed at “minority immigrant cultures”.

“As much as Americans like to romanticise that everyone in their family came here in an orderly and legal manner through Ellis Island, properly documented if incorrectly named, such an idea is a grand and beautiful falsehood,” he said.

“Most people, unless, they are recent immigrants, simply don’t know how their families arrived here and they may have no true understanding of what they went through.”

The 48-year-old married immigrant with one daughter said that he and his twin sister emigrated to the US to join their father who had worked as a a labourer on building sites in Boston from the 1970s.

Mr O’Malley, who lives just north of Boston, said that his father died in the US before he could become an American citizen.

He took US citizenship at a naturalisation ceremony at Boston’s Faneuil Hall, which is also known as “the cradle of liberty,” surrounded by hundreds of other people of different ethnicities and cultures.

“If my father had been alive to see it, I know he would have been very proud, as proud as every other waving, jubilant immigrant in that room on that day despite our very different and complicated journeys to get there,” he said.