Trump and Biden take to the states of Michigan, Wisconsin and Minnesota

Democratic presidential nominee Joe Biden has slammed US President Donald Trump's assertion that the country had moved past the worst days of the pandemic, as he campaigned in the battleground state of Florida. Video: Reuters 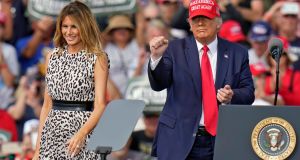 All eyes are on the midwest on Friday as the two presidential candidates descend on the states of Michigan, Wisconsin and Minnesota.

Donald Trump’s election victory in 2016 was based on his surprise win in a trio of states – Michigan, Wisconsin and Pennsylvania – which had traditionally voted Democrat. Though he won each state by less than one per cent, they delivered him 46 electoral college votes, pushing him past the 270 electoral college votes needed to win the election.