‘The events of this past week have reopened wounds few can imagine,’ statement says 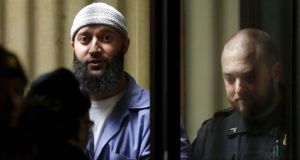 Adnan Syed at courthouse in Baltimore, Maryland where a judge last week began reviewing whether he should receive a new trial amid national interest in his case after it was featured on the popular podcast ‘Serial’. Photograph: Carlos Barria/Reuters

The family of Hae Min Lee, whose former boyfriend is seeking a retrial 16 years after he was convicted of killing her, broke its silence on Sunday.

A state circuit court judge in Baltimore last week began reviewing whether the former boyfriend, Adnan Syed, should receive a new trial amid national interest in his case after it was featured on the popular podcast “Serial.” The hearing before Judge Martin Welch is scheduled to enter its fourth day on Monday.

“The events of this past week have reopened wounds few can imagine,” the family said in a statement released by the office of the Maryland attorney general. “It remains hard to see so many run to defend someone who committed a horrible crime, who destroyed our family, who refuses to accept responsibility, when so few are willing to speak up for Hae.”

Lee was born in South Korea and immigrated to the United States with her mother and brother. Her mother, Youn Wha Kim, took the stand at Syed’s sentencing and told the court through an interpreter that she had moved to the United States so that her children could have a “decent education and a decent future,” according to The Baltimore Sun.

Prosecutors said that dream was cut short on January 13th 1999, when Syed, then 18, lured Lee to a Best Buy parking lot after school, strangled her, then buried her body in a nearby park with the help of a friend. Prosecutors used the friend’s testimony and cellphone tower data to persuade a jury to convict Syed of murder and kidnapping in 2000. He was later sentenced to life in prison plus 30 years.

Fourteen years later, Syed’s trial was resurrected and examined in the first season of the podcast “Serial.” Its episodes, which were released over two months starting in October 2014, were downloaded more than 100 million times and spawned a fury of online debate over his guilt and the flaws of the criminal justice system.

Syed, who has maintained since his arrest that he is innocent, has been seeking a retrial since 2009, arguing that he did not receive adequate representation at his trial. A judge ruled in November that his lawyer could introduce testimony from Asia McClain, an alibi witness who did not testify in the murder trial.

Syed’s defence is also challenging the testimony of an expert cellphone witness whose statements were crucial in the murder trial but who has since said he was not shown a crucial disclosure that would have affected his testimony.

In a statement, the state’s deputy prosecutor, Thiru Vignarajah, said previous testimony and evidence showed that Syed “received a tenacious and dogged defence” in his murder trial. “To think there was an oops or an oversight back then, let alone a failure of constitutional dimension, is just not consistent with what we are now seeing in the defence’s file,” he said.