‘Selma’ version of Lyndon B Johnson is a dangerous distortion

Film-makers have a responsibility to be accurate about race, the US’s original sin 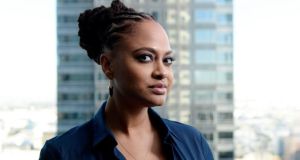 ‘Selma’ director Ava DuVernay: ‘This is art; this is a movie; this is a film. I’m not a historian. I’m not a documentarian.’ Photograph: Kevork Djansezian/Reuters

I went on Friday morning to see Selma and found myself watching it in a cinema full of black teenagers. Thanks to donations, DC public school kids got free tickets to the first Hollywood movie about the Rev Martin Luther King jnr on his birthday weekend – an effort duplicated for students around the country. The kids did plenty of talking and texting, and plenty of fighting over whether there was too much talking and texting.

Slowly but surely, though, the crowd was drawn in by the Scheherazade skills of the Selma director, Ava DuVernay. The horrific scene of the four schoolgirls killed in the white supremacist bombing of a church in Birmingham, Alabama, stunned the audience. One young man next to me unleashed a string of expletives and admitted he was scared. When civil rights leaders were clubbed, whipped and trampled by white lawmen as feral white onlookers cheer, the youngsters seemed aghast.

In a delicately wrought scene in which Coretta Scott King calls out her husband about his infidelities, some of the teenage girls reacted with a chorus of “oooohs”. DuVernay sets the tone for her portrayal of Lyndon B Johnson as patronising and skittish on civil rights in the first scene between the president and King. LBJ stands above a seated MLK, pats him on the shoulder, and tells him “this voting thing is just going to have to wait” while he works on “eradication of poverty”.

Many of the teenagers by me bristled at the power dynamic between the men. It was clear a generation of young moviegoers would now see LBJ’s role in civil rights through DuVernay’s lens. And that’s a shame. I loved the movie and find the Oscar snub of its dazzling actors repugnant. But the director’s talent makes her distortion of LBJ more egregious. Artful falsehood is more dangerous than artless falsehood because fewer people see through it.

DuVernay told Rolling Stone that, originally, the script was more centred on the LBJ-MLK relationship and was “much more slanted to Johnson”. “I wasn’t interested in making a white-saviour movie,” she said. Hollywood has done that with films like Mississippi Burning, which cast white FBI agents as the heroes, or Cry Freedom, which made a white journalist the focus rather than Denzel Washington’s anti-apartheid activist Steve Biko. Instead of painting LBJ and MLK as allies, employing different tactics but complementing each other, the director made Johnson an obstacle.

Top Johnson aide Jack Valenti told Michael Beschloss, the presidential historian, that LBJ aspired to pass a Voting Rights Act from his first night as president. Valenti said his boss talked to him about it the night of JFK’s assassination, before the newly sworn-in president went to sleep.

On the tape of a phone conversation between Johnson and King the week of LBJ’s 1965 inauguration, the president said he indicated the time was not yet ripe to ask Congress for it, and he made it clear they both needed something that would move public opinion more than a presidential speech.

“Johnson was probably thinking, at least in part, of the spring of 1963, when JFK was privately saying the public wasn’t yet politically ready for a comprehensive civil rights Bill,” Beschloss said. “Then came the May 1963 photograph of Birmingham police setting dogs against African-American demonstrators, which helped to move many white Americans who were on the fence about the issue.

“Once Selma happened, LBJ was, of course, horrified, but he knew that the atrocity would have an effect on white Americans similar to Birmingham that would make it easier for him to get a Voting Rights Act from Congress.”

In an interview with Gwen Ifill on PBS, DuVernay dismissed the criticism by Joseph Califano jnr and other LBJ loyalists, who said the president did not resist the Selma march or let J Edgar Hoover send a sex tape of her husband to Coretta King.

“This is art; this is a movie; this is a film,” DuVernay said. “I’m not a historian. I’m not a documentarian.” The “Hey, it’s just a movie” excuse doesn’t wash. Film-makers love to talk about their artistic licence to distort the truth, as they bank on authenticity to boost them at awards season.

There was no need for DuVernay to diminish LBJ, given that the Civil Rights Movement would not have advanced without him. Vietnam is enough of a pox on his legacy. As I have written about Lincoln, Zero Dark Thirty and Argo, and as the New York Review of Books makes clear about The Imitation Game, the truth is dramatic and fascinating enough. Why twist it? On race – America’s original sin – there is an even higher responsibility to be accurate.

DuVernay had plenty of vile white villains – including one who kicks a priest to death – and they were no doubt shocking to the DC school kids. There was no need to create a faux one. – (New York Times)