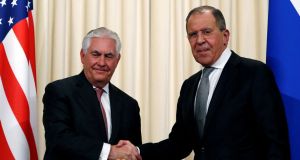 Russia on Wednesday rejected calls to withdraw support from Syrian president Bashar al-Assad, claiming that would curtail efforts to fight Islamic State in the country and querying US claims that the Syrian leader was behind recent chemical attacks.

As US secretary of state Rex Tillerson held extended meetings with both Russian foreign minister Sergei Lavrov and the country’s president Vladimir Putin in Moscow, Mr Lavrov accused the US government of undertaking an “illegal attack against Syria” and criticised Washington’s “confusing and sometimes openly contradictory ideas on the entire range of bilateral and international issues”.

Speaking alongside Mr Lavrov following more than three hours of meetings, Mr Tillerson reiterated the US view that the Assad regime was to blame for the April 4th chemical attack on the town of Khan Shikhoun in Idlib province, in which more than 80 were killed.

“The perspective of the United States is that the recent chemical weapons attack carried out by Syria was planned, directed and executed by Syrian regime forces. This is just the latest use of chemical weapons by the Assad regime,” he said. He added that Mr Assad had presided over more than 50 attacks, using weapons such as cluster bombs and chlorine bombs “intended to main and kill in the most horrific ways”.

But his Russian counterpart called for an investigation by the United Nations into the attacks, stating that Russia had “no confirmation” that chemical attacks had taken place, and criticising the “media hysteria” about the matter.

“We insist on an objective investigation of what happened on April 4th,” he said. “We have to make sure we are impartial now in investigating this whole business.”

The US responded to the alleged chemical attack with a missile strike on the Shayrat air base in Syria, the first military action by the US against the Assad regime.

Mr Tillerson said it was the position of the US that Mr Assad should go as part of a political solution to the Syrian conflict. While he said it was important that Mr Assad’s departure “is done in an orderly way,” he said “the final outcome does not provide for a role for Assad or the Assad family for the future governments in Syria”.

But Mr Lavrov said that “ousting a particular personality is not on our agenda”.

Mr Tillerson, who was personally awarded an Order of Friendship medal by Mr Putin in 2013 when he was chief executive of ExxonMobil, met Mr Putin for two hours during which time the situation in Syria and the April 4th attack were discussed.

While there was a “low level of trust” between the countries, Mr Tillerson pledged to increase communication between Washington and Moscow. “The world’s two foremost nuclear powers cannot have this relationship,” he said.

On Ukraine, Mr Lavrov said that both the US and Russia were working towards fulfilment of the Minsk agreement and were also in favour of pursuing talks through the so-called Normandy format, which has seen the leaders of France and Germany chair talks between Ukraine and Russia.

Mr Tillerson said that US sanctions on Russia, introduced in co-ordination with the European Union following Russia’s incursion into Ukraine and annexation of Crimea, had not been discussed during the meeting.

Mr Lavrov stressed that the two sides had a range of common positions, particularly over the issue of North Korea, with the Russian foreign minister calling for strategic reductions in the country’s nuclear stockpile.

As a flotilla of US warships continued to make their way towards waters near North Korea, Donald Trump spoke to Chinese prime minister Xi Jinping by phone, amid signs that Beijing may be weighing the adoption of a tougher approach to Pyongyang.

In a shift in editorial policy, the Beijing-based Global Times wrote that China “can no longer stand the continuous escalation of the North Korean nuclear issue at its doorstep,” warning that it could cut off oil supplies to the country. Mr Trump tweeted on Wednesday: “Had a very good call last night with the President of China concerning the menace of North Korea.”

Mr Tillerson played down the import of the decision to divert the ships. “There is no particular objective in its current course. I would not read anything into the Carl Vinson’s current location,” Mr Tillerson said, referring to the US aircraft carrier.