Is truth catching up with the Trump White House? 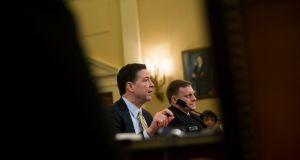 FBI director James Comey and Michael Rogers, director of the NSA: Comey said that a tweet put out by the president’s account, interpreting what he said, was not accurate. Photograph: Eric Thayer/The New York Times

“Well, you reported on ‘X’, so he is just using your words.” They say there are 50 Eskimo words for snow (fake news! Alternative fact!) but how many words does the White House have for lying?

It’s hard to keep your head in the game. Early on in this charade, David Remnick of the New Yorker spoke about feeling as if he was hallucinating, and there are strong similarities between observing Donald Trump’s presidency and being subject to the unpredictable effects of mind-altering drugs. Are you seeing this? You’re seeing this, right? Wait, did you hear that? Am I the only one hearing this? If we’re all hearing this then why is no one reacting? The White House has been transformed into a DC ayahuasca lodge, with Trump as shaman-in-chief, leading us all on a transformative bad trip, complete with purging and puking.

During Trump’s campaign, every insane thing that happened felt like both the tipping and breaking point. This has to be the thing that does it. No, this has to be it. Okay, I know we’ve said it before, but definitely this time, this is it. But the problem with being stuck in an avalanche is that you can’t identify which rock is hitting you. They just keep coming. Relentless. Such news avalanches, with truth buried underneath, have typified Trump’s presidency so far.

Disorientation is the natural reaction. So many things are happening that it really does feel like reality itself is spinning out of control. With the truth now relegated to decent reporters sounding like bunkered survivors flicking the switches on CB radios on Twitter, the practicalities Americans were warned about when it comes to authoritarianism and fascism sound more urgent and necessary than every before: write down what you know, because it can be eroded very quickly. Forgetting is what follows normalisation. It’s funny how quickly the truth dissolves.

Trump’s minions, the Spicers and Conways and Huckabee Sanderses, are in one way blunt instruments, playing whack-a-mole with the truth in a laughable fashion. But in another way, such ludicrousness is actually masterful deflection. Sometimes, the most idiotic methods are the most effective. “I know you are, but what am I?” isn’t the height of sophisticated rhetoric, but it’s certainly hard to get around. From a reporting point of view, there are only so many times we can read or hear or write the words “unprecedented” or “extraordinary” and have them sink in with the intended impact. In a skyline of record-breaking skyscraper lies can yet another tall tale really stand out?

All this said, it really does feel as though the ground shifted a little this week. With year-long political news cycles in the Washington-Mar-A-Lago axis now occupying mere weeks, and in some cases days, the Russian question won’t go away, no matter how many diversions Trump tries to cause.

The biggest crack in the Trumptonic plates happened during the remarkable (unprecedented? Extraordinary?) Monday hearing with FBI director James Comey and National Security Agency (NSA) director Mike Rogers when the latter was asked whether there was evidence Russia directly altered vote tallies in key states. The question itself was a very specifically positioned one. “Nothing generated by the NSA,” Rogers replied.

Meanwhile, over on whack-a-mole Twitter, the Potus account – that’s the US president’s official account – shared a clip of that response, tweeting, “The NSA and FBI tell Congress that Russia did not influence electoral process.”

But of course, that’s not what happened or what was said, and it was also completely taken out of context. Later during the hearing, when that tweet was put to Comey, he said that wasn’t accurate. It was a bizarre live fact-checking scenario that, even if written into an episode of Scandal, would feel like a bit of a leap as a plot point. What it does mean though is that the “information” coming out of the White House was shot down for all to see by the director of the FBI (for whatever that’s worth). Whether or not that will have an impact on the Fox News-watching, Breitbart-reading Trump supporters is another thing. But it was a jolt hard enough to freeze the spin for a second.

What happens next? Are the cracks really showing? American politics has fallen so far down the rabbit hole that it’s easy to wonder whether it can actually come back. But as long as shards of truth find themselves among this bizarre shattered house of mirrors, there is hope that even among the constant lying and head-melting surrealism of Trump’s presidency, the truth will out.

1 Michael Smurfit: ‘I asked Trump to invite me to the White House for my 80th birthday’
2 The strain is starting to tell on Brendan O’Connor
3 Coronavirus: HSE experts support the early reopening of schools
4 We need to pay very close attention to what is happening in Britain now
5 Small businesses are cannon fodder in zealous anti-virus experiment
Real news has value SUBSCRIBE