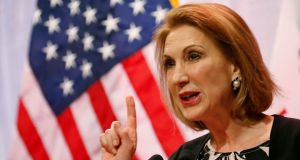 Former Hewlett-Packard CEO Carly Fiorina: “I think I’m the best person for the job because I understand how the economy actually works. I understand the world, who’s in it, how the world works.” Photograph: Jim Young/Reuters

Ms Fiorina is the second female candidate after Democrat Hillary Clinton and is running as an outsider having never held public office. She is hoping her experience as a former chief executive will benefit her among an electorate fed up with Washington politics and make her stand out among the senators and governors.

“Yes, I am running for president,” she told ABC’s Good Morning America. “I think I’m the best person for the job because I understand how the economy actually works. I understand the world, who’s in it, how the world works.”

Challenging a government that has become “a giant, bloated, unaccountable, corrupt bureaucracy”, Ms Fiorina said Americans were “kind of tired of the political class, and they believe that we need to return to a citizen government.”

Ms Fiorina, a candidate with a long-odds chance of winning the Republican nomination who is seen as a more likely vice-presidential nominee, is popular among conservatives who dominate the voting in the early presidential nominating states such as Iowa because of her anti-abortion views and critical attacks on Hillary Clinton.

She has criticised the former secretary of state as untrustworthy because of the 2012 attack on the US diplomatic outpost in Benghazi, Libya and the foreign donations to the Clintons’ charitable foundation.

Mr Carson declared his presidential aspirations in an interview on Sunday ahead of a campaign launch event in his hometown of Detroit.

“I’m willing to be part of the equation and therefore I’m announcing my candidacy for president of the United States, ” he said.

Carson, like Fiorina, has cast himself as a non-political outsider, telling his kick-off campaign event, “I’m not a politician”, after a choir sang a rendition of Eminem’s Lose Yourself.

The African-American medic, who holds some controversial views, became a favourite of the Republican party’s conservative wing after he chastised President Barack Obama over his healthcare plan when speaking next to the president at the national prayer breakfast in 2013.