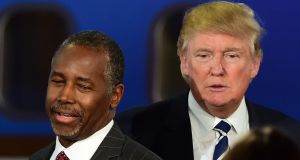 Republican presidential hopefuls Ben Carson and Donald Trump: a poll on Tuesday show Carson with a 26 to 22 per cent lead over Trump nationally in the race for the party’s candidacy. Photograph: Frederic J Brown/AFP/Getty Images

It’s first-time candidates Ben Carson and Donald Trump versus everyone else tonight, as the Republican Party has its third debate (8pm eastern time; midnight Irish time), this time in Colorado. While a CBS News/New York Times poll released on Tuesday showed Carson with a first ever 26 to 22 per cent lead over Trump nationally, the real news is the remarkable lack of movement among the far more traditional candidates below them in the poll.

Florida senator Marco Rubio is well behind at 8 per cent, followed by former Florida governor Jeb Bush and one-time Hewlett-Packard chief executive Carly Fiorina at 7 per cent. Every other Republican presidential wannabe is at 4 per cent or lower. While the numbers have changed for the pair at the top, together they still pull nearly half the votes of likely GOP primary voters, almost exactly their combined percentage of a month ago.

“The voters are cynical about candidates who say they’ll fix things and then don’t when they are in office,’’ said Tim Clark, a Republican consultant in Sacramento. For the top flight of those second-tier contenders, the two-hour debate at the University of Colorado in Boulder provides a chance to distinguish themselves with both the viewing public and the equally important audience of pundits and campaign donors looking for the election day winner.

It’s also an opportunity to tear into Carson and Trump, forcing them to give up some of their mad-as-hell voters looking for a different sort of candidate.

“This is the last hurrah for a lot of these candidates,’’ Clark said. But with the February 1st Iowa caucuses still months away, all the contenders still have plenty of work to do, and much of it starts tonight. The country, for example, has never elected a president who hasn’t either held political office or served as an army general. For Carson, a neurosurgeon, and Trump, a developer-entrepreneur, it’s a matter of convincing voters they have what it takes to actually run the country.

“Trump is going to have to colour inside the lines a bit more than he’s used to because people are starting to ask whether he’s safe to be president,’’ said Jessica Levinson, who teaches political ethics at Loyola Law School in Los Angeles. As for Carson, “he has to show he has some level of expertise’’ on the issues he would face as president, she added.

The debate also is an important turning point for Bush, who started the campaign season as the inevitable choice of the GOP establishment, but now finds himself struggling to break out of the trailing pack. The last few days have provided little to build confidence among his supporters. At a Saturday town hall in South Carolina, for example, Bush lashed out against what he said was the political gridlock affecting the country – and likely at the current state of the GOP primary race.

“I got a lot of really cool things I could do other than sit around and be miserable, listening to people demonise me and me feeling compelled to demonise them,’’ Bush said. “That is a joke. Elect Trump if you want that.’’ Bush has been a more aggressive campaigner recently, taking shots at Trump and Cruz. It’s something he needs to continue in the debate, Levinson said. Bush “has to distinguish himself from Rubio and explain why his experience is so important’’ for a presidential candidate, she said.

The candidate in the best position to move up may be the 44-year-old Rubio, whose age and engaging backstory as the son of Cuban immigrants who has moved quickly up the political ladder, may provide a contrast to the older, more traditional faces on the stage.

“Rubio has to show he’s the voice of tomorrow and has the gravitas to go against Hillary Rodham Clinton, ’’ Levinson said. The GOP free-for-all is very different from the much more sedate Democratic primary contest, where Clinton has made herself the overwhelming favourite.”

The one question that needs to be asked of every candidate Wednesday is ‘How do you defeat Hillary?’’’ said Tony Quinn, a former California GOP consultant turned political analyst. The debate’s focus, however, is still likely to be Carson and Trump, candidates almost no one expected to carry their front-runner status so deep into 2015.

“There is a segment of voters who are really just looking for someone outside the normal political structures,’’ said Mark DiCamillo, director of the Field Poll. “A lot of people think these are early dalliances and that voters will be moving back to more traditional candidates,’’ DiCamillo added. “But there’s no evidence of that happening yet.”