Prince did not leave behind a will, sister claims 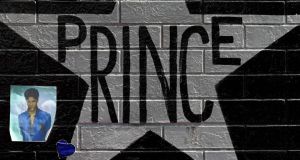 The tribute to Prince, who died suddenly at the age of 57, at the First Avenue club in Minneapolis, Minnesota. Photograph: Mark Ralston/AFP/Getty Images

Prince is not thought to have left behind a will following his sudden death, according to court documents filed by the music superstar’s sister.

Tyka Nelson has asked for a special administrator to be appointed to oversee the musician’s estate after his body was found at his Paisley Park home near Minneapolis on Thursday.

In the paperwork, Ms Nelson, Prince’s only full sibling, writes: “I do not know of the existence of a will and have no reason to believe that the decedent executed testamentary documents in any form.”

Ms Nelson lists herself and five other half-siblings, John, Norrine, Sharon, Alfred and Omar, as potential heirs to Prince’s fortune.

The star’s half-sister Lorna, who died in 2006, is also listed as an interested person.

The documents, filed to the Carver County probate court in Minnesota, state that an “emergency exists” because “immediate action and decisions need to be made to continue the ongoing management and supervision” of Prince’s business interests.

Ms Nelson has asked that Bremer Trust, a corporate trust company, be named administrator because its affiliate, Bremer Bank, has knowledge of Prince’s “personal financial and business financial affairs”.

The size of Prince’s fortune is unclear, although he made hundreds of millions of dollars for record companies, concert venues and others during his career, and his estate included about $27 million in property.

Prince’s first manager has previously voiced concerns that the star’s sister is not “business savvy” enough to handle the rights to her brother’s vast music catalogue.

Owen Husney told the Press Association: “I’m sure Tyka is a great person. I would be remiss to think she has the music business savvy to be able to handle a body of work that’s got to be worth $250 to $500 million.

“Prince’s music has never really appeared in commercials. God forbid someone gets hold of this thing and it winds up in some toothpaste commercial.

“I pray that he has left it in good hands with people who know what they’re doing.”