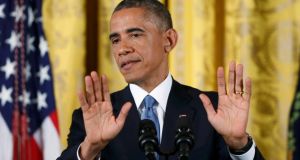 President Barack Obama answering questions in the White House yesterday. He said he is “eager to work with the new Congress to make the next two years as productive as possible”. Photograph: Larry Downing/Reuters

Democrats soul-searched as Republicans basked in their stunning victories in the midterm elections after the party regained the Senate, strengthened its majority in the House of Representatives to the biggest margin in generations and unseated governors in Democratic states.

In his first public comments since the heavy losses, the Democrat president offered a hand of co-operation to next year’s Republican-led Congress to find agreement on political issues stalled in the toxic partisanship that has paralysed US governance.

“I’m eager to work with the new Congress to make the next two years as productive as possible,” Mr Obama said.

He spoke shortly after Republican Mitch McConnell told the media in Kentucky that the party’s victories reflected the dissatisfaction with the Obama administration and “dysfunction” in Washington.

At his press conference, Mr Obama said to all those who voted, “I hear you,” and, pointedly referring to the traditional low turnout in midterms, told the “two-thirds” who chose not to: “I hear you too”.

The president, whose unpopularity helped Republicans win back the Senate and overall control of Congress for the first time since 2006, said he would work with the GOP to try to find agreement on issues.

“The United States of America has big things to do,” he said. “We can and will make progress if we do it together.”

Republicans won seven Democratic Senate seats – in Colorado, Iowa, Arkansas, West Virginia, North Carolina, Montana and South Dakota. The majority could rise further with two more gains once late votes are counted in Alaska and after a run-off election in Louisiana next month.

GOP gains left the party the largest majority in the House of Representatives since 1928, bringing to almost 70 the total number of net House seats lost by the president over his two terms, the most dropped in midterm elections by any president since Harry Truman.

Mr Obama said he would leave the blame game to political analysts but pointed to the public frustration with the failure of the White House and Congress to pass legislation. “The American people overwhelmingly believe that this town doesn’t work well and does not attend to their needs,” he said. “They rightly hold me accountable to make it work properly.”

Reprising his famous 2008 presidential victory speech to show he was willing to find agreement, Mr Obama said: “I continue to believe that we are simply more than a collection of red and blue states”.

One senior Democratic aide in Congress blamed the White House’s failure to support the fundraising efforts of senators for the losses.

“We were beating our heads against the wall,” David Krone, chief of staff to the outgoing Democratic leader in the Senate Harry Reid.

Pointing a finger of blame at the president, Mr Krone accepted that an unpopular Obama wasn’t going to play well in some states. “It doesn’t mean that the message was bad, but sometimes the messenger isn’t good,” he said.