Plague of wild pigs has US authorities squealing

Estimate of 5.5m feral hogs across States which devour crops and spread diseases 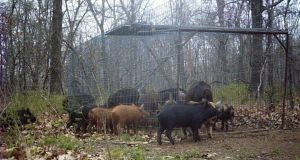 Feral hogs move in and around a trap set by farmer Jim Vich near Locust Grove, Oklahoma, in this 2011 handout surveillance camera photo courtesy of Jim Vich. Photograph: Jim Vich/Handout via Reuters

A few years ago, Jim Vich would not have dreamed of setting up an elaborate trap to catch wild hogs.

But that was before Oklahoma was invaded by a plague of pigs that devour crops, uproot pastures, destroy wildlife habitats, spread disease to humans and animals, kill trees and even knock over cemetery stones.

“I started trapping them more or less in self-defence,” said Vich, 60, a livestock farmer in northeast Oklahoma. “They were tearing up my place.”

Oklahoma is battling a wild pig problem that has spread across the United States. The pigs, evolved from introduced wild boars or from escaped domestic stock, are prevalent in 36 states and have been sighted in 47 states, according to authorities who track their populations.

They are vicious critters that typically grow to 90kg, can run 140km per hour, jump 1 metre high and climb out of traps with walls up to 1.8 metres, experts say.

“They are the ultimate survivors,” said John Mayer, manager of the environmental science group at the Savannah River National Laboratory in Aiken, South Carolina. “They can live pretty much anywhere, eat pretty much anything, they don’t have enough predators and they reproduce faster than any other mammal.”

They seldom appear in the daytime making them hard to count, but Mr Mayer estimates there are 5.5 million feral pigs nationwide. There could be up to 8 million, up from a maximum 2 million in 1990, he said.

State and local authorities are increasingly desperate to stop their advance. Trapping and shooting are the primary means of eliminating wild pigs, but researchers are also trying to develop poisons and birth control to control the population.

Some states such as Texas have even authorised hunting from helicopters. “They are here to stay and its going to take a huge concerted effort to get the numbers under control,” said Russell Stevens, a wildlife and fisheries consultant for the Oklahoma-based Samuel Roberts Noble Foundation.

The federal government is joining the pig purge. The Agriculture, Animal and Plant Health Inspection Service is preparing a national feral swine plan. US president Barack Obama has proposed $20 million (€15m)in his proposed 2014 budget for the plan, US Department of Agriculture officials have said.

Most feral swine give birth starting at 6 to 12 months and have litters of 6 to 12 piglets twice a year, Mr Mayer said.

Families of pigs have repeatedly used their powerful, plow-like snouts to uproot the hay fields on Nancy Bond’s farm in northeast Oklahoma. They eat roots and grubs, destroying fields and making them lumpy and hard to work in, she said.

Chad Hibbs, caretaker of the Mayes County Deer Ranch near Locust Grove in Oklahoma, pointed to soybean fields shredded by feasting wild hogs and to deer feeders scraped and battered by pigs.

Hunters exacerbated the problem in many states by catching and releasing pigs so they could pursue them, spreading them to more areas. States such as Oklahoma have made releasing pigs illegal and Kansas in 2006 banned hunting of wild pigs altogether.

Mr Vich, the pig trapper, showed a large trap on a remote part of his farm that resembles a livestock pen but is rigged with wires along the ground. He baits the trap with corn in hopes the pigs will trip the wire and slam the door behind them.

A mechanical engineer by training, Mr Vich said he has trapped hogs for five or six years and sometimes nabs 9 to 12 pigs at a time, which he loads into a livestock trailer and takes home to sell to neighbours for meat.

“They are not happy when they get trapped and they are very vicious,” Vich said. “They would hurt you in a heartbeat if they got the chance.”

Pigs are wandering into urban areas, damaging lawns and parks and being hit by cars, said Billy Higginbotham, professor and wildlife and fisheries specialist for the Texas A&M University Extension Service.

Pigs were introduced into the continental United States in 1539 in what is now Florida and used as a travelling food source by explorers, said Higginbotham. Most wild pigs evolved from domestic pigs that escaped into the wild prior to the 1930s, said the Noble Foundation’s Stevens.

Texas is the most pig-plagued state, with an estimated 2.9 million in 2011, Higginbotham said. They are present in all but one of the state’s 254 counties. Florida is second and California third, according to Stevens.

Dale Nolte, the man at the US Department of Agriculture charged with drawing up a plan to stop the pig pestilence, is blunt about the objective.

“In states with emerging populations of feral swine, our goal is to eliminate them,” Mr Nolte said.