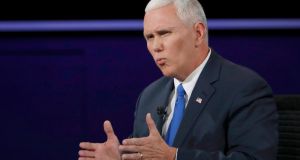 Donald Trump, in his preparation for the second presidential debate against Hillary Clinton, should watch running mate Mike Pence’s performance in his vice-presidential TV debate on Tuesday night.

The Indiana governor delivered a poised performance at Longwood University in Farmville, Virginia, brushing off attacks on the Republican presidential nominee’s actions and statements during the campaign. He offered a game-plan for Trump to follow in Sunday’s debate against Clinton.

In that split-screen camera shot trained on the candidates for the 90 minutes, the Indiana governor oozed cool, wrongly denying that Mr Trump had made the remarks, dismissing them as the mistakes of an inexperience politician, and even faking a look of outrage that someone might say such things.

As Kaine, a lawyer by training and 18-year politician, attempted to prosecute Clinton’s case against Trump, he reached too far at times, appearing too excited and straining far too much last night.

The normally ebullient Kaine appeared unsettled in his role as Clinton attack dog. He seemed excitable and fidgety while on the offensive, and uncomfortable as he scribbled notes while his opponent talked. Pence, in contrast, was mild-mannered and formal, maintaining a steady composure.

He frustrated Kaine’s attacks as the two sides battled it out over who was running the most insult-driven presidential campaign. Pence tried to turn around some of the attacks to Trump’s advantage.

Pressed on the revelation that the businessman may have used a near-$1 billion loss in 1995 to avoid personal income taxes for almost two decades, Pence used it as an example of a Trump triumph in the face of adversity: how he used it to create “a runway” to a multi-billion dollar business.

“Donald Trump is a businessman, not a career politician. He actually built a business. Those tax returns that came out publicly this week show he faces some pretty tough times 20 years ago,” he said.

“Did you work on that one a long time?” replied Pence. “Because that had a lot of really creative lines in it.” In response to another pre-cooked line lifted from Kaine’s campaign stump speech, Pence said: “You use that a whole lot. And I think your running mate used a lot of pre-done lines.”

It created the impression that Clinton’s running mate could not think for himself. When Kaine told personal stories or discussed nuanced issues of policy such as his carefully crafted position on the death penalty, the Democrat projected a more relaxed demeanour and was a far more effective debater.

Pence’s guard did eventually drop on the issue of abortion. When Kaine reminded the anti-abortion social conservative that Trump had said women who have abortions should be punished, the Virginia senator asked why the businessman said that when Pence argued that they would never enforce that.

“Look, he’s not a polished politician like you and Hillary Clinton,” he responded. “You know, things don’t always come out exactly the way he means them.”

It was a rare admission from Pence of a weakness in the candidate sitting above him on the presidential ticket and it will do little to instill public confident in Trump’s fitness to lead.

Despite much taunting, Pence largely did not try to defend his running mate, and commentators will be poring over his shifts in policy - on immigration, on Syria and on Russia - from the Republican nominee’s stated positions.

By choosing to define his own platform, rather than defend his running mate’s, Pence presented a coherent Republican model of low taxes, small government and socially conservative values that will appeal to a broad base of the party.

If it does not help Trump this time around - and it should help to shore up his core support - it will certainly help the Indiana governor’s future presidential ambitions.