Sitora Yusufiy, ex-wife of Omar Mateen, 29, told reporters on Sunday (June 12) that her ex-husband was emotionally and mentally disturbed with a violent temper after Orlando shootings. Video: Reuters 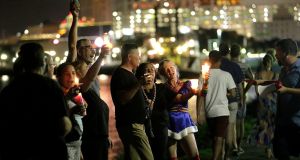 Hundreds of New Orleanians make a human chain along the Moon Walk by the Mississippi River during a candlelight vigil for the victims of the massacre at the Pulse nightclub in Orlando. Photograph: Michael DeMocker/NOLA.com The Times-Picayune via AP 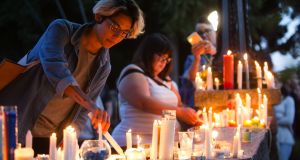 People light candles to add to a growing memorial outside of Cal Anderson Park to honour the Orlando shooting victims in Seattle on Sunday, June 12th, 2016. Photograph: Lindsey Wasson/The Seattle Times via AP 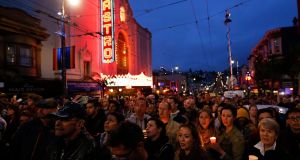 Residents of San Francisco and the Bay Area gather to mourn the victims of the Orlando shooting. Photograph: John G Mabanglo/EPA 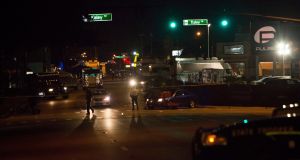 Police and rescue officers monitor the scene in the aftermath of a mass shooting at Pulse nightclub, in Orlando. Photograph: John Taggart/EPA

Doctors fear the death toll from the deadliest mass shooting in US history will rise, as the identities of the 49 people who were gunned down began to emerge.

So far 15 victims aged between 20 and 50 have been publicly identified as victims of Omar Mateen (29) who massacred revellers and at least one employee at a gay nightclub in Orlando, Florida.

At a press conference on Monday, Orlando Police Department (OPD) confirmed the total death toll of 50 includes 49 victims plus the shooter. Forty-eight of 49 victims have been identified by authorities and 24 next of kin have been notified.

Mateen was a US citizen born in New York to Afghan parents who lived in Fort Pierce, about 120 miles southeast of Orlando.

US president Barack Obama called the attack at Pulse nightclub “an act of terror and an act of hate”.

“Today marks the most deadly shooting in American history,” he said during a brief statement from the White House in which he again raised concerns about the ease of access to weapons in the United States.

More than 300 people were inside the Pulse nightclub when the sound of gunfire began to rip through the air just after 2am.

The killer moved into the nightclub, firing repeatedly, before taking dozens of revellers hostage.

Mateen exchanged fire with police and retreated to a bathroom and stayed there with hostages.

OPD said it made the decision to commence a rescue operation because further loss of life was imminent.

The suspect came out with two handguns and shot at officers - they returned fire and the suspect was killed at about 5am.

Negotiators were in contact with the suspect, who talked about bombs and wearing a vest.

Officials said 39 people died in the venue and 11 at hospitals in the city where 53 people remain, most in a critical condition.

The majority of the casualties were taken to the Orlando Regional Medical Centre, where trauma surgeon Dr Mike Cheatham warned: “I think we will see the death toll rise.”

Appreciate the congrats for being right on radical Islamic terrorism, I don't want congrats, I want toughness & vigilance. We must be smart!

The youngest of the dead to be named so far is Luis Omar Ocasio-Capo, 20. The oldest to be killed was Franky Jimmy Dejesus Velazquez, 50.

The Orlando suspect called 911 before the attack and pledged allegiance to Islamic State, according to FBI agent Ronald Hopper. He also referenced the brothers who carried out the 2013 Boston Marathon bombing.

Mr Hopper told reporters in Orlando that Mateen was interviewed twice by the bureau – in 2013 about inflammatory comments he made to work colleagues claiming potential ties to terrorists, and in 2014 about his possible connections with Moner Mohammad Abusalha, the first American to carry out a suicide attack in Syria.

The FBI closed the investigation in 2013, when they were unable to verify the comments he made and the following year found his contact with Abusalha was minimal. Despite those interviews, Mateen was legally able to buy two firearms in the past week, an ATF federal investigator said.

Mateen’s family suggested the attack by the married father-of-one may have been a hate crime aimed at the lesbian, gay, bisexual and transgender community. The suspect’s father, Mir Seddique told NBC News that his son, who was a security guard, became enraged when he saw two men kissing in front of his wife and son (3) on a recent trip to Bayside, in Miami.

“We are apologising for the whole incident,” said Mr Seddique.

“We weren’t aware of any action he is taking. We are in shock like the whole country. This had nothing to do with religion.”

“Appreciate the congrats for being right on radical Islamic terrorism,” he tweeted. “I don’t want congrats, I want toughness and vigilance. We must be smart!”

Speaking on CNN on Monday, Mr Trump said the tragedy could have been less severe “if you had some guns in the club”.

He said the solution to preventing similar shootings is intelligence: “We need a much better intelligence - gathering information.”

He also emphasised that Muslims should report possible terrorists before attacks are carried out.

“Believe me, [Muslim communities know the people who have the potential to blow up,” he said. “They know there’s something off.”

The attack on the nightclub, filled with about 300 people, during LGBT Pride month, began at 2.02am (7.02am in Ireland) when a police officer working at the club exchanged fire with a gunman who then went inside and took hostages.

About three hours later, a special weapons and tactics (Swat) police team raided the club and exchanged gunfire with the suspect, who was with hostages, killing him.

Orlando police chief John Mina said the gunman used an assault rifle – an AR-17 semi-automatic with large capacity rounds of bullets that has become a signature of US mass shootings – and a handgun.

The suspect’s ex-wife told the Washington Post that he was mentally unstable and violent during a two-year marriage that ended in 2011.

Relatives of those caught up in the attack have recalled the dramatic moments when their loved ones found themselves cornered by the suspected gunman.

Mina Justice said her son Eddie texted when the attack began and asked her to contact the police. He told her he ran into a bathroom to hide with others and texted: “He’s coming.”

“That was the last conversation.”

The Irish Embassy in Washington DC is monitoring developments but has not had any requests for consular assistance.