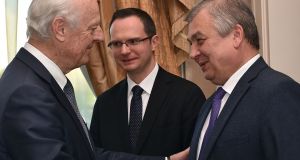 A Russian proposal calling for a halt to fighting in certain areas of Syria could lead to a resumption of UN-brokered peace negotiations in Geneva.

In a memorandum tabled on Thursday during talks in the Kazakh capital, Astana, Russia urged a cessation of fighting and freezing of front lines between government and opposition forces in four locations.

The “de-escalation” zones would be in northwestern Idlib province, the central province of Homs, the southern province of Deraa, and the eastern suburbs of Syria’s capital, Damascus. If these zones are established, refugees could return home and humanitarian aid resume.

The proposal from Moscow was signed by Turkey and Iran and accepted by the Syrian government. If also supported by the Saudi-sponsored armed opposition, it could pave the way for a resumption of the Geneva talks.

The UN-sponsored talks, aimed at securing a long-term political settlement to Syria’s six-year-old conflict, which has claimed an estimated 400,000-plus lives, have been taking place on and off over several years.

Since Syrian government allies Moscow and Tehran are behind the “de-escalation” zones proposal, Damascus accepted the plan, but Turkey, which supports some armed groups, could not secure acceptance by factions backed by Saudi Arabia and Qatar.

The delegation of armed factions, headed by Saudi-appointed Mohamed Alloush, withdrew from the talks on Wednesday, demanding an end to government bombing of insurgent-held areas. The delegation returned on Thursday but refused to sign the memorandum.

Before submitting the proposal, Russian president Vladimir Putin secured backing from his US and Turkish counterparts Donald Trump and Recep Tayyip Erdogan, who have called for such zones.

US secretary of state Rex Tillerson said Tuesday’s conversation between Mr Putin and Mr Trump had been “very constructive [involving] a lot of detailed exchanges”. A White House statement said the leaders had agreed “suffering in Syria has gone on for far too long and all parties must do all they can to end the violence”.

The future of Syrian president Bashar al-Assad was not discussed, indicating there is no disagreement over his fate. While Mr Putin has backed Assad since the war began in 2011, the Obama administration had called for his removal. Mr Trump, however, stated recently, “The future of Assad is not a deal breaker”.

After meeting Mr Putin on Wednesday, Mr Erdogan argued “de-escalation zones in six regions could resolve the regional conflict by half”.

Since January, Kazakhstan, considered neutral by all parties, has hosted four proximity talks involving the Syrian government and a delegation representing a dozen armed factions.

The aim of these talks is to secure a permanent ceasefire, regarded as essential by UN mediator Staffan de Mistura for progress in the Geneva talks on a political settlement involving Damascus and political opposition groups.

Mr de Mistura argues the Astana meetings are a prerequisite, not a replacement, for Geneva.

The importance of the latest Astana gathering was demonstrated by the attendance of Mr de Mistura, who had previously sent aides, and the dispatching by Washington of assistant US secretary of state Stuart Jones, who participated as an observer, upgrading the US presence from the ambassadorial level. Jordan also attended.

Talks at Astana had been delayed until now due to last month’s apparent nerve gas attack by government aircraft on an insurgent-held town and retaliatory US cruise missile strike on a Syrian air base.

Islamic State and al-Qaeda’s Jabhat Fatah al-Sham (formerly Nusra), branded terrorist organisations, are excluded from all ceasefire arrangements and could act as spoilers.

There the group shares control with radical fundamentalists considered “moderate” by western powers.