US President Barack Obama touts his economic record in his final State of the Union address. Video: Reuters 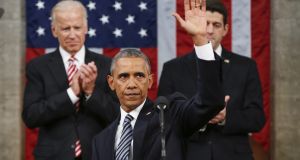 US president Barack Obama conceded that, seven years after his campaign promise to overcome divisions in America, he had failed to meet it. “It’s one of the few regrets of my presidency that the rancour and suspicion between the parties has gotten worse instead of better,” he said. Photograph: Evan Vucci/Pool/Getty

Barack Obama stopped as he was about to leave the House of Representatives chamber on Capitol Hill after delivering his State of the Union address, his final oratorical report card on his presidency.

“Let me look at this thing one last time,” the 44th president said, as he looked around the chamber after running the gauntlet of handshakes, cheek kisses and autograph requests from Democrats down the aisle.

Obama used his last keynote presidential address to lawmakers and the American public as an opportunity to remind them that the hope and change agenda that swept him to power more than seven years ago is still possible, despite the piercing negative rhetoric and brutal tribalism that has characterised the race to succeed him.

Striking an optimistic tone, Obama’s final State of the Union was by far his best, dropping the prescriptive laundry list of wished-for policies that dominated his previous addresses in favour of a big theme: that his accomplishments in office leave the country well-placed for the future.

He talked up his achievements, reforming a healthcare system and lifting the economy out of recession. The president framed his boasts in the context of the feverish Republican presidential race, dismissing the claims of his critics who mock his record on a daily basis on the campaign trail.

“All the talk of America’s economic decline is political hot air,” he said. “So is all the the rhetoric you hear about our enemies getting stronger and America getting weaker.”

Although never mentioned in the hour-long speech, Republican presidential contenders Donald Trump and Ted Cruz were not far from Obama’s mind as he railed against the divisive rhetoric that has played to the deep polarisation paralysing US politics.

“When politicians insult Muslims . . . that doesn’t make us safer,” he said, in a thinly veiled reference to Trump’s radical proposal to bar Muslims from the US. “That’s not telling it like it is. It’s just wrong. It diminishes us in the eyes of the world.”

In a clear reference to Cruz’s call to “carpet bomb” Islamic State militants in the Middle East, Obama challenged the bellicose language of the campaign.

“Our answer needs to be more than tough talk or calls to carpet bomb civilians,” he said. “That may work as a TV sound bite, but it doesn’t pass muster on the world stage.”

Obama’s main message was to return to a theme that catapulted him to the White House: changing politics and the state of Washington. In a rallying call, the president argued for the need to “fix our politics”.

“Our public life withers when only the most extreme voices get attention,” said the president in another passing dig at Trump.

Obama conceded that, seven years after his campaign promise to overcome divisions in America, he had failed to meet it. “It’s one of the few regrets of my presidency that the rancour and suspicion between the parties has gotten worse instead of better,” he said.

In a rare humble moment in a speech that tended to be bombastic, Obama accepted some blame for this, noting his shortcomings and his hopes of achieving his goal in his last year in office.

“I have no doubt that a president with the gifts of Lincoln or Roosevelt might have better bridged the divide,” he said.

In a year of frenzied presidential election politics, a rapprochement is unlikely. Republicans responded angrily to his speech, saying it showed Obama was living in a “fantasy land” and in a “state of denial”.

She did, however, raise some of the same concerns as Obama did, jabbing at the angry rhetoric of Republican candidates.

“During anxious times, it can be tempting to follow the siren call of the angriest voices,” Haley said. “We must resist that temptation.”