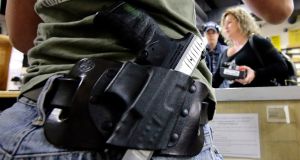 President Barack Obama has defended his plans to tighten the nation’s gun-control restrictions on his own, insisting that the steps he is expected to announce today fall within his legal authority and uphold the constitutional right to own a gun. Photograph: David J Phillip/AP

President Barack Obama has moved to tighten gun laws in the US following a series of mass shootings, claiming his plan would save lives.

But the proposals were sure to lead to opposition in Congress and the powerful gun industry lobby.

Mr Obama wants to require all gun sellers to register as dealers — including those who sell at gun shows and online — and to run background checks on all prospective purchasers.

The president has been looking for ways to work around a Republican-led Congress that has blocked his previous efforts to tighten gun laws in the wake of mass shootings.

Mr Obama has accused Republicans — and some Democrats — of being beholden to the gun industry lobby and opposing some measures he says a majority of Americans support, including expanded background checks on gun sales.

But the issue of gun control bitterly divides Americans, with many viewing any attempt to regulate firearms as a possible infringement on their constitutional rights to own guns.

“This is not going to solve every violent crime in this country,” Mr Obama said. But he added: “It will potentially save lives and spare families the pain of these extraordinary losses.”

The president’s plan to broaden background checks forms the centrepiece of a broader package of measures he wants to take on his own on gun control in his final year in office.

Although Mr Obama cannot unilaterally change gun laws, the president is hoping that beefing up enforcement of existing laws can prevent at least some gun deaths in a country rife with them.

1 At least eight shot dead in German town of Hanau
2 A Russian cruiser with ‘cannibal rats’: What other ‘ghost ships’ could be out there?
3 DUP pleads with UK to reduce salary threshold for migrant workers coming to North
4 ‘If all the immigrants go back, who will work in the meat factories and do the crap jobs?’
5 Jewish council dismayed at Sinn Féin TD’s ‘unacceptable’ tweets
Real news has value SUBSCRIBE