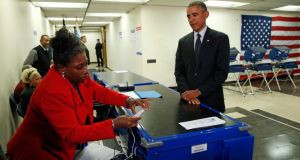 US president Barack Obama receives his ballot paper as he takes part in early voting in the Senate midterm elections at a polling station in Chicago. Photograph: Reuters/Kevin Lamarque

On Monday, Barack Obama went home to Chicago to vote. “I love voting,” he said as he cast his ballot early for the upcoming November 4th midterm elections to decide control of the US Congress.

“The way we win any election is making sure we turn out,” he said a short time later during a visit to an Illinois election campaign office.

For Democrats, getting out the vote is the big challenge to holding onto their majority in the Senate. Mr Obama won the 2008 and 2012 presidential elections by motivating young, female and minority voters in large numbers.

However, voting records show that it’s much harder to mobilise voters to turn out in midterm elections – and that those who do vote tend to favour Republicans. The party of the president generally suffers in the midterms, but particularly during the second term in what is known as as “the six-year itch.”

In the 2012 presidential race, 45 per cent of 18- to 29-year- olds voted compared with just 24 per cent in 2010, according to the Non-Profit Vote, which promotes voter participation.

There was a 64 per cent turnout among women in 2012 compared with just 46 per cent in the 2010 midterm elections, when Republicans recaptured a majority in the House of Representatives by picking up 63 seats, representing the largest change in seats in six decades. Mr Obama famously described the Democratic losses as a “shellacking”.

“What is weird is this phenomenon,” said Mac McCorkle, professor of public policy at Duke University in North Carolina. “We almost have two electorates operating: a midterm electorate that is more white, conservative and older, and a presidential electorate that is way more supportive of a Barack Obama or a Hillary Clinton. ”

Every campaign features calls to voters to turn out on election day, but in this cycle Democrats really mean it – for them, this is a turnout election. If their voters fail to show up, it will be a repeat of 2010.

It’s not looking good for the Democrats. Two weeks ago Pew Research published a survey under the headline, “For many Americans, a ‘meh’ midterm.” Just 15 per cent were closely following the election race, compared with 25 per cent in 2010 and 21 per cent in 2006, the survey said. Democrats see this vulnerability and are dispatching the big guns.

“Now, you know, this race is too close to call and it all comes down to who shows up,” Hillary Clinton told a campaign event last week in Kentucky, where she rallied support for the Senate Democratic nominee, Alison Lundergan Grimes. She urged people to convince their family, neighbours, “people you see in the supermarket and on the street” to vote.

Democrats were already facing an uphill battle to stop Republicans picking up six Senate seats, which would give the party a stranglehold on Congress and define Mr Obama’s final two years in the White House as a period of even worse partisan gridlock in government.

Of 36 Senate seats (out of 100) up for grabs next month, seven are in states that Mitt Romney, the last GOP presidential nominee, won in 2012. These include four seats held by sitting Democrat senators in Louisiana, Arkansas, Alaska and North Carolina. The chances of the GOP reclaiming a national governing majority for the first time in eight years have improved over the past week, running at 63 to 66 per cent.

Mr Obama’s approval rating fell to a record low of 40 per cent in the same poll. His unpopularity means he has not campaigned with candidates fighting close races in Republican-leaning states. He can’t even canvass in tight races in Colorado and Iowa – states he won twice.

Democrats have run away from the president in campaigns, but this may backfire among the party’s most loyal supporters. In Kentucky, Grimes’s refusal to say whether she voted for Mr Obama may suppress turnout in an election where Democrats need African-American votes.

“I mean, c’mon,” said congresswoman Marcia L Fudge of Ohio, chairwoman of the Congressional Black Caucus. “I think that does make black and brown people say: ‘Why are we supporting this person if she doesn’t support the president?’” The cacophony of negative campaign ads, telling voters why they shouldn’t vote for a candidate, may also depress turnout.

“Occasionally a campaign or an outside group will go too far on negativity and that is when it will backfire, specifically in regard to that ad and generally it will turn off people and they won’t vote at all,” said Timothy Hagle, a political science professor at the University of Iowa.

With less than two weeks to go, the Democrat voter machine that was so successful in getting out the vote for Mr Obama will need to run on overdrive if the party is to avoid another shellacking.