America Letter: Slavery and vying for jobs part of legacy along with warm relations 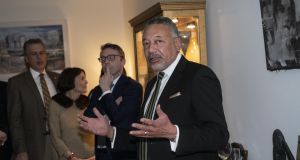 Dennis Brownlee: head of African American Irish Diaspora Network learned about his Irish heritage growing up in Cleveland, Ohio, in the 1960s.

As preparations begin for St Patrick’s Day in the United States, an event in New York this week explored an often overlooked aspect of Irish-American identity.

The Irish consulate in New York hosted a gathering to mark the launch of the African-American Irish Diaspora Network, a new forum that aims to explore the links between Irish and African-American identity.

Though precise figures are difficult to establish, it is estimated that up to 38 per cent of African-Americans have Irish ancestry.

Welcoming guests to the event, consul general Ciaran Madden explained the impetus behind the initiative. He recalled how, on arriving in New York in 2017, he soon realised that each event he hosted or addressed was almost exclusively white.

The aim of the initiative is to examine the connections between black identity and Irishness, in the process opening up a dialogue about definitions of Irish-American identity.

Among those who spoke at the event was Dennis Brownlee, an African-American who will head the organisation. He learned about his Irish heritage while growing up in Cleveland, Ohio, in the 1960s.

“My mother kept telling me we had some Scotch Irish heritage, but at the time it didn’t really mean much to me,” he said. “During the civil rights movement and the onset of black power, I was much more concerned and interested in identifying with that black part of my identity.”

It was only years later that he began to connect with this part of his identity when he moved next door to Stella O’Leary, the head of the Irish American Democrats in Washington DC, who encouraged him to pursue his Irish links. Through research, including a recent visit to Dublin, he learned more about his ancestors, including his links to Belfast on his maternal side.

Keith Wright, chair of the New York county Democratic Party and son of the late African-American New York State supreme court justice Bruce Wright, said he has vivid memories of his grandmother who was from Ireland. But he never really felt connected to Irish-America while growing up in Harlem.

“The Patrick’s Day parades, the Irish centres . . . it was not really part of my identity,” he said.

Ensuring that African-Americans can connect with their Irish heritage is a central aim of the new initiative. But positing a more inclusive version of Irish-American identity also involves some difficult conversations about the legacy of slavery, race relations and conquest in America.

Many of the unions between Irish and African-Americans were forged through rape and coercion. Many Irish were slave-owners, and there is a long history in America of indentured slaves being forced into sexual activity.

There was also the difficult relationship between working-class Irish immigrants and the black community, as both competed for work and respect in 19th-century America. This reached its zenith with the draft riots of 1863, which saw an Irish-dominated mob kill dozens of people, mostly African-Americans, in three days of race riots in New York.

But there were also plenty of positive stories – of love, respect and shared cultures – which saw many Irish immigrants defy the racial conventions of the time.

Research by Virginia Ferris, for example, shows that Irish and African-American interracial families lived together in New York’s eighth ward in the years after the civil war.

Further north, in Seneca Village, which was later dismantled to make way for Central Park, African-Americans and Irish lived side by side.

Recovering the lost stories of Irish and African-American connections is a key part of Miriam Nyhan Grey’s work at Glucksman Ireland House at New York University. As part of an oral history project, she has completed 10 interviews to date with non-white Irish-Americans.

Other academic research in the field is ongoing. Academic Christine Kinealy has written a book on 10 black abolitionists who visited Ireland around the same time as Frederick Douglass, the renowned African-American orator and former slave who visited Ireland in the 1840s, meeting key figures in Irish political life such as Daniel O’Connell.

As America prepares to embrace Irish identity over the coming weeks, many hope that this new initiative can be a way of challenging the white homogeneity of Irish-America – to underline the fact that, like all national identities, Irishness is fluid, multidimensional and always in the process of being formed and refashioned.