Nancy Reagan: First lady who brought a touch of glamour to the White House 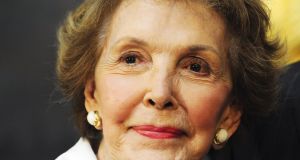 Nancy Reagan: The first lady had raised eyebrows as soon as she arrived in Washington by spending more than $800,000 on a lavish redecoration of the White House. Photograph: Karen Bleier/AFP/Getty Images 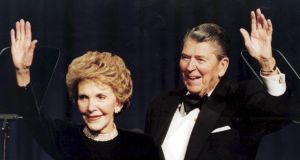 By the time she died on Sunday at the age of 94, Nancy Reagan had become a fully certified American national treasure, venerated on both sides of that country’s political divide as an exemplary public figure from a vanished golden age.

During her eight years as first lady in the 1980s, however, she was more widely viewed as a vulgar, grasping Lady Macbeth, who manipulated a weak-willed Ronald Reagan throughout their tenure in the White House.

Known by some of Reagan’s aides as his “personnel director”, Nancy was instrumental in the hiring and firing of many of his top staffers, engineering the sacking of chief of staff Donald Regan in 1987 in the wake of the Iran-Contra scandal.

Regan took his revenge a year later in a memoir that revealed that the first lady had used an astrologer to help shape the president’s schedule.

The astrologer, Jean Quigley, could veto the timing of all presidential press conferences and she advised when it was safe for him to travel and when he should hold a summit with his Soviet counterpart Michael Gorbachev.

“I picked a time on the day they left that was an excellent time for what we wanted to accomplish, and I also changed their evil empire attitude by briefing them on Gorbachev’s horoscope.

“By the time we were working on the Washington summit, she was calling me two and three times a day,” Quigley told NBC News.

After four dour years under Jimmy Carter, when alcohol was not served at White House receptions, the Reagans brought a touch of Hollywood glamour to Pennsylvania Avenue.

But patrician Republicans like Nancy’s successor as first lady, Barbara Bush, looked down on the parvenu couple who had swept in from California, while others suspected that Reagan’s adoring spouse was a phoney.

“Two entries on Nancy Reagan’s birth certificate are accurate – her sex and her colour. Almost every other item has been invented,” her unauthorised biographer Kitty Kelley wrote.

Kelley picked multiple holes in Nancy’s version of her own past, from her claim that her father was a prosperous Princeton graduate to her professed commitment to family values.

After a brief career as a Hollywood actress, Nancy focused on wooing Reagan, perfecting at an early age the “adoring gaze” that became the hallmark of their appearances together.

As first lady, she became the face of the Reagan administration’s campaign against drug use, embracing the slogan “Just Say No”.

Despite her reputation as a power behind the throne, she was no more assertive than many of her 20th century predecessors in the East Wing.

Rosalynn Carter had attended cabinet meetings and undertaken her own diplomatic initiatives; Eleanor Roosevelt was such an independent figure that she held her own press conferences; and Woodrow Wilson’s wife Edith effectively assumed the presidency for two years after he had a stroke in 1919.

Nancy’s influence on Reagan was, for the most part, benign, seeking to soften the more hawkish positions advocated by ideologically driven staffers and persuading the president to apologise for the Iran-Contra affair, when the proceeds from covert arms sales to Iran were used to fund right-wing Nicaraguan rebels.

The turnaround in her reputation began after the Reagans left the White House, when she persuaded her husband to make public his diagnosis of Alzheimer’s disease in 1994.

Ten years later, just before Reagan’s death, she led a high-profile campaign in favour of allowing embryonic stem cell research, a position that placed her in opposition to the administration of George W Bush.

As she made the case for pursuing research that could help people with Alzheimers, Americans could see the fundamental truth about Nancy Reagan that informed everything she did in public life – her commitment to her husband.

“I’ve had quite a life, when you stop and think about it,” she told Vanity Fair in one of her final interviews.

“I’m very lucky. Especially with Ronnie – I was the happiest girl in the world when I became we.

“Even in the very beginning, I was always so proud of him. Everything he did. And it wasn’t that I had to force myself. I just was.”

The visit of Nancy Reagan and her husband, US president Ronald Reagan, to Ireland in June 1984 was of major significance in anchoring Ireland’s ties with the United States.

However, the protests that followed them around Ireland showed how much had changed since John F Kennedy’s landmark visit in 1963.

Tight security meant few Irish people got to meet Mrs Reagan as she accompanied her husband to official engagements in the Dáil and Galway. Before the visit, the then first lady admitted she had no Irish blood herself and was “just flying in on the heels of her husband”.

This wasn’t her first visit – some years earlier, according to Ronald, the couple travelled out west to a ruined chapel where St Patrick raised the first cross on Irish soil. There they found a wishing well and made a wish.

That wish came true when they landed in Shannon in 1984, he said. Irish Times writers described Mrs Reagan as looking like “a tinier, more delicate feminine replica of her husband”.