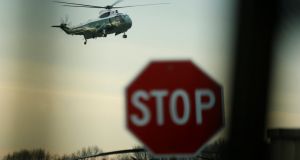 US president Donald Trump arriving aboard Marine One to greet the remains of a US military commando killed during a raid on the al-Qaeda militant group in southern Yemen on Sunday, at Dover Air Force Base, Delaware on Wednesday. Photograph: Jonathan Ernst/Reuters

The US military has launched an investigation into the scale of civilian casualties in a botched special forces raid against a suspected al-Qaeda base in Yemen, the first such mission to be approved by Donald Trump, as questions mount over the operation.

After initially denying there had been any civilian casualties in Sunday’s raid, US Central Command (Centcom), which is responsible for military operations in the Middle East and central Asia, acknowledged some of the dead may have included women and children, though claimed some of the women were armed.

A statement said its assessment “seeks to determine if there were any still-undetected civilian casualties in the ferocious firefight”.

The Pentagon has said a US Navy Seal, chief petty officer William Owens, and 14 militants were killed in the raid in al Bayda province. Medics at the scene said about 30 people, including 10 women and children, were killed. Three US special forces were wounded.

The mission was approved over dinner five days after the presidential inauguration by Mr Trump and his closest advisers, including his son-in-law Jared Kushner and his special adviser and former Breitbart executive Stephen Bannon, as well as defence secretary General Jim Mattis.

Both the New York Times and Reuters carried quotes from unnamed military officials that seemed to shift blame for the mission to Mr Trump and his inner team. It would be an extraordinary development for a president, who is commander-in-chief, to be briefed against in such detail.

The briefings suggested that one thing after another went wrong from the start of the mission, with the Yemen villagers seemingly alerted to the impending raid by drones flying lower than usual.

The special forces, apparently lacking full intelligence, were confronted by heavily-fortified positions, including landmines, and faced heavy gunfire from buildings all around during the 50-minute firefight. One of the US planes sent in to help had to be left behind and was deliberately destroyed.

The mission had been prepared under the Obama administration but it had not been approved.

The civilian dead included an eight-year-old girl, Nawar al-Awlaki, according to her family, who may have been an US citizen. Her father was al-Qaeda propagandist and US citizen Anwar al-Awlaki, who was killed in a September 2011 US drone strike in Yemen.

The Centcom statement, said: “A team designated by the operational task force commander has concluded that civilian noncombatants likely were killed in the midst of a firefight during a 29 January raid in Yemen, and that casualties may include children.

“The known possible civilian casualties appear to have been potentially caught up in aerial gunfire that was called in to assist US forces in contact against a determined enemy that included armed women firing from prepared fighting positions and US special operations members receiving fire from all sides, including from houses and other buildings.”

Centcom insisted the raid resulted in the seizure of material and information that is providing valuable intelligence.

US Air Force colonel John Thomas said: “Al-Qaeda in the Arabian Peninsula has a horrifying history of hiding women and children within militant operating areas and terrorist camps, and continuously shows a callous disregard for innocent lives. That’s what makes cases like these so especially tragic.”

One of the two suffered engine failure, two of the officials said, and hit the ground so hard that two crew members were injured, and one of the marine jets had to launch a precision-guided bomb to destroy it.