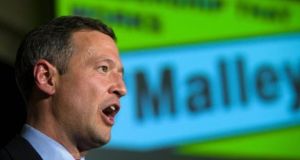 With a pint of Guinness in one hand and a guitar strapped around his neck, US Democratic presidential hopeful Martin O’Malley kicked off the opening event for the newly formed group, “Irish Americans for O’Malley,” at a pub in Washington DC.

Held on Thursday evening at The Dubliner, a staple of the city, Mr O’Malley stood on a small wooden stage and told the enthusiastic crowd about a large “Help wanted; No Irish need apply” sign he kept on his desk throughout his time as Mayor of Baltimore.

It dated from the 1890s, “about the time that my great-grandfather was here and no doubt would have seen those signs,” he told the packed pub.

Three months before the first nominating contest, Mr O’Malley is in third place in the polls, far behind both former first lady Hillary Clinton and Vermont senator Bernie Sanders. About 25 percentage points separate him from Mr Sanders’ second place spot.

The group is meant to draw support from the country’s Irish-American demographic. Despite being known for his strong Irish roots (his great-grandfather emigrated from Maam in Co Galway), Mr O’Malley has yet to solidify their support. In fact, Mrs. Clinton has the backing of the lobby group Irish American Democrats.

After a short speech, Mr O’Malley peeled off his jacket, rolled up his sleeves and lifted up a nearby guitar.

“Alright, if you have any requests...” he told the crowd, which included the Embassy of Ireland’s deputy head of mission, Michael Lonergan.

He then proceeded to sing alongside a three-member Irish band, such classics as, ‘Oh Danny Boy’ and ‘This Land is Your Land’. With James Joyce’s likeness staring down at him, Mr O’Malley moved his head to the beat of the songs, harmonised with a fellow singer and even had the audience join in for a few rounds.

The former Maryland governor also made sure to highlight his support of comprehensive immigration reform during the event. On multiple occasions he has proposed executive actions aimed to bring millions of illegal immigrants to the country, many of whom would come from Ireland.

“I think we need comprehensive immigration reform that recognizes the economic realities of our times,” said Mr O’Malley.

“I think the old system and the quotas has grown outdated. Our country is made better every generation by the arrival of new American immigrants. And we need to have an independent office that actually accesses our economic needs and sets immigration levels accordingly,” he said.

Liz McCloskey, a visiting scholar at Washington University and an Irish-American, said she came to the pub to support Mr O’Malley.

“It’s very exciting to me, how much the Irish community has advanced in every single field, but still has never forgotten our roots. There’s a deep commitment to serving people who are struggling,” she said. “That is something I believe Martin O’Malley represents.”

The event also featured a small group of young step-dancers and was meant to act as a send-off for Mr O’Malley’s trip to South Carolina for the first in the south candidates forum.

“There’s a lot of people who tell me, ‘man you’re in a tough fight,’” he said. “But being Irish, I kind of like a tough fight.”