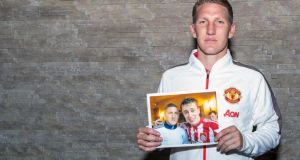 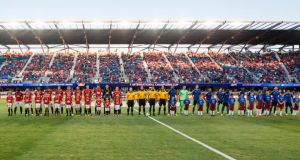 Manchester United footballer Bastian Schweinsteiger paid his respects to one of the Irish students killed in the Berkeley balcony collapse last night following a friendly game in California.

The German star posed for a photograph to honour Dublin student Niccolai Schuster who was a huge fan of World Cup winner and a supporter of Mr Schweinsteiger’s former club, Bayern Munich.

The footballer held the photograph of himself and Mr Schuster, a picture the student treasured and an image that was widely circulated following the accident.

Mr Schuster’s friends wore Bayern Munich jerseys at his funeral in Dublin to honour the student.

Mr Schweinsteiger and his team mates joined 18,000 fans, a capacity crowd at Avaya Stadium in San José, the home of the San José Earthquakes, south of San Francisco, to observe a moment’s silence before the game in memory of the six students killed in Berkeley.

The English Premier League team’s captain Wayne Rooney led stars including Juan Mata and Memphis Depay along with their American Major League Soccer opponents in silence to remember the victims before Manchester United’s second game of their US summer tour.

The game in San José, about 80 kilometres south-of Berkeley, was attended by family members of Ms Donohoe and two of the seven students injured in the accident, Niall Murray and Aoife Beary.

The four students still in hospital following the accident five weeks ago are now being treated in the same Californian medical centre.

Mr Murray was moved from a San Francisco hospital on Tuesday to the Santa Clara Valley Medical Centre, south of the city, where Ms Beary, Clodagh Cogley and Hannah Waters are being treated.

A third student injured in the accident, Conor Flynn, left San Francisco on a flight to Dublin on Tuesday evening after being cleared by doctors to fly. Although released from hospital the week after the accident, he had been unable to fly due to a punctured lung.

He follows two of the other injured, Jack Halpin and Sean Fahey, who have returned home to continue their recovery from the accident.

Irish students on J-1 summer visas in the Bay Area were spotted wearing GAA and Irish jerseys among the crowd of spectators at the game in San José on Tuesday night.

Mr Schweinsteiger started the friendly fixture on the bench and came on as a substitute at a half-time.

San José and Ireland have strong connections. The city is twined with Dublin and San José-Dublin Sister City Committee, which organises events involving the cities, has close ties with the Earthquakes.